Silk Embroidered Postcards from the Trenches

2018 marks the 100th anniversary of the Armistice, heralding the end of the Great War in Europe. Most of us are familiar with images of battles and the trenches, but there are reminders of the War which are far more delicate and personal. Collections of embroidered silk postcards are held in museums around the world which stand as that reminder of the human face behind the turmoil.

Embroidered postcards became popular in the early 1900s, following on from the development of woven silk postcards first produced in Germany in 1898. Stitched on a fine silk gauze or organza background, the embroideries were cut out, stuck to cards and framed with embossed paper. 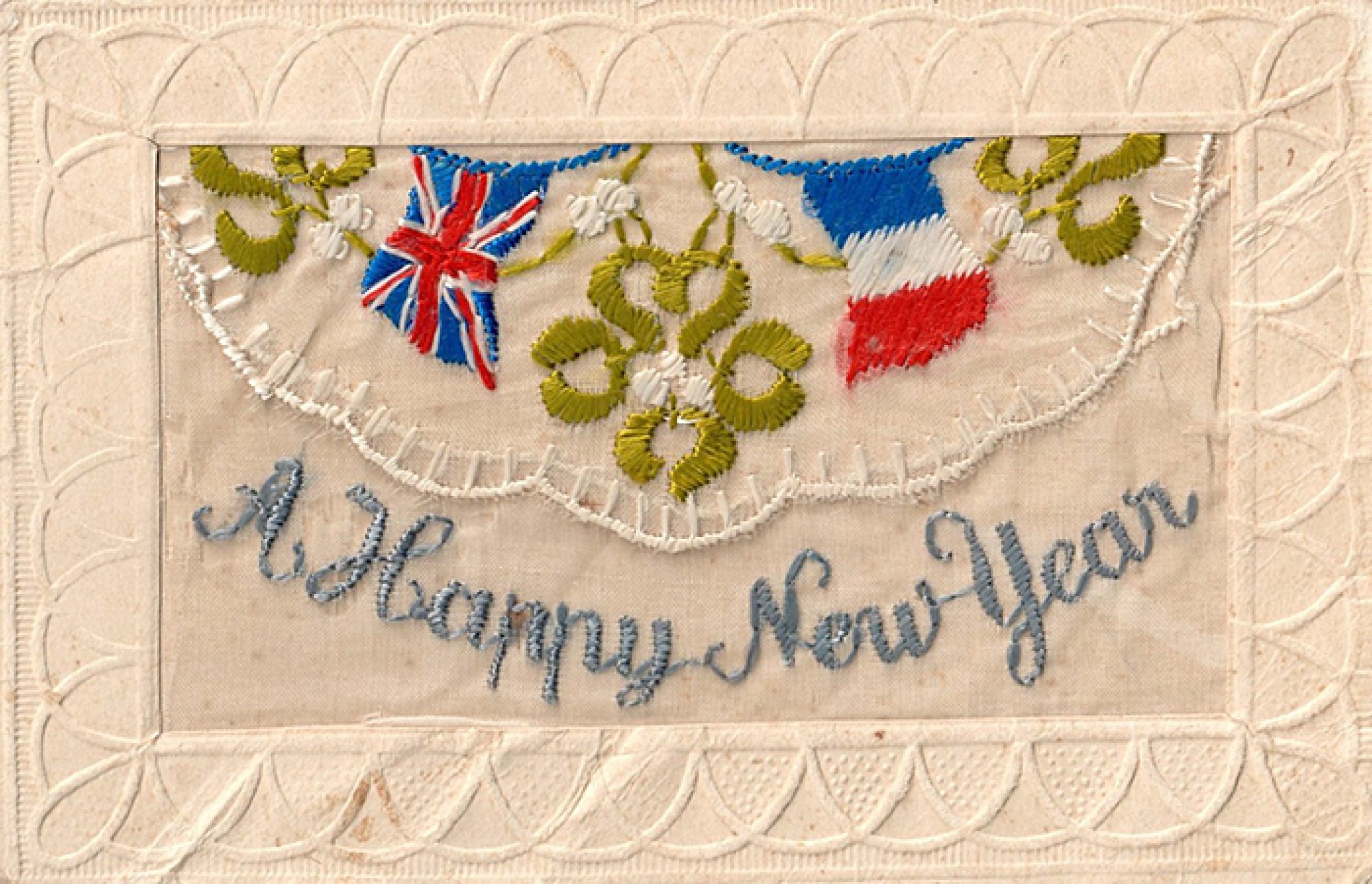 The postcards carried a range of designs. Popular images included flags, regimental badges, romantic depictions of flowers and butterflies, and sentiments in various European languages. The designs were worked in colourful silks and incorporated a number of stitches, including satin stitch, herringbone stitch, back stitch and running stitch. 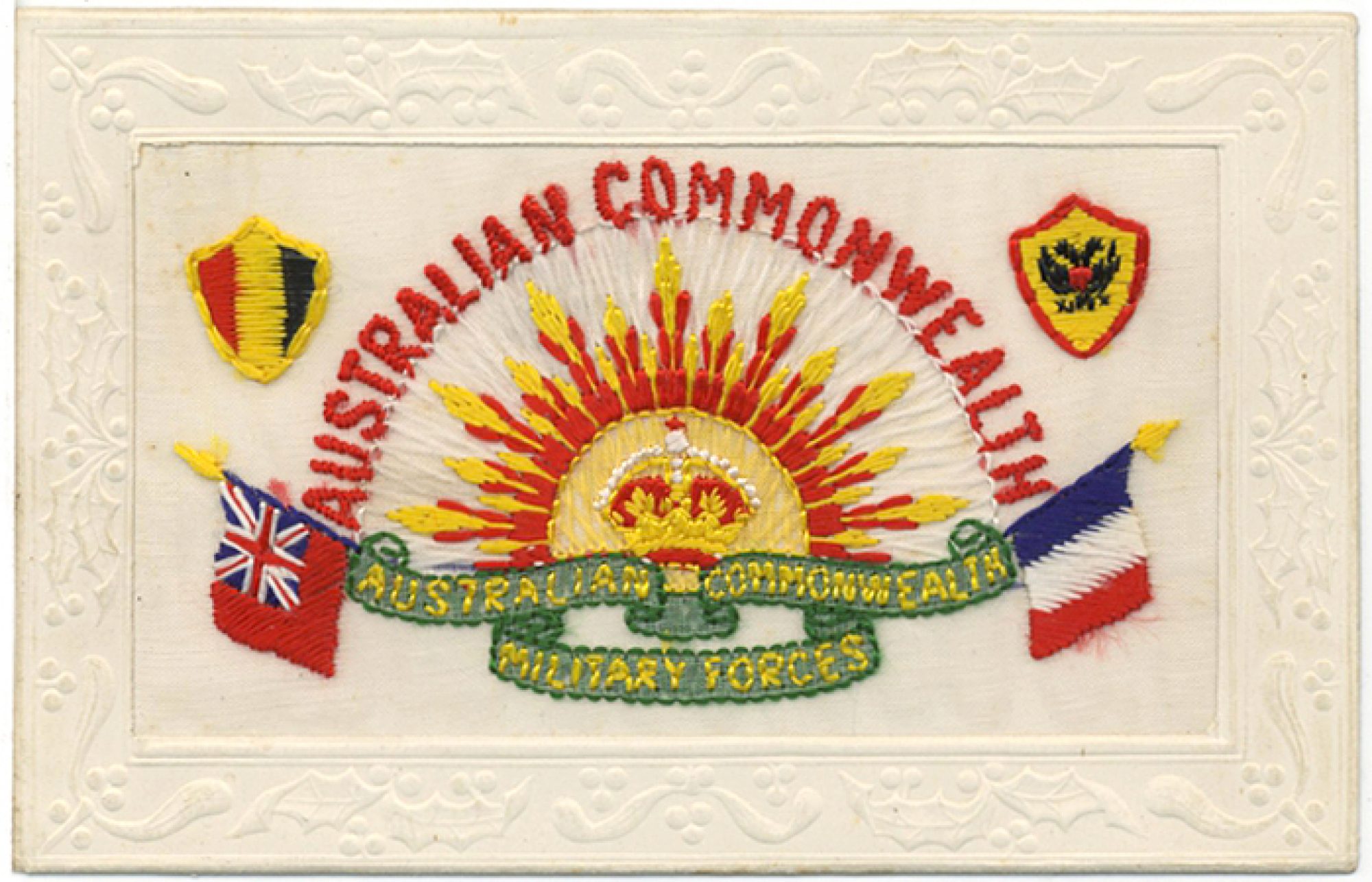 Curiously, when we started researching this topic, the first few resources stated that the embroidered designs were thought to have been worked by French peasant women or refugees. Apparently, they laboriously stitched the same design up to 25 times on a strip of silk mesh before sending their completed work to a factory for cutting and mounting.

However, the Textile Research Centre in Leiden argues convincingly that it is more likely these postcards were made by machine, set up to appear as if they had been hand sewn. With no evidence of underdrawing, it would have been challenging for an individual to stitch each design so consistently.

Perhaps it was possible that the women in France were so prolific, but the museum has examples of uncut sheets of designs which suggests a manufacturing process was involved. 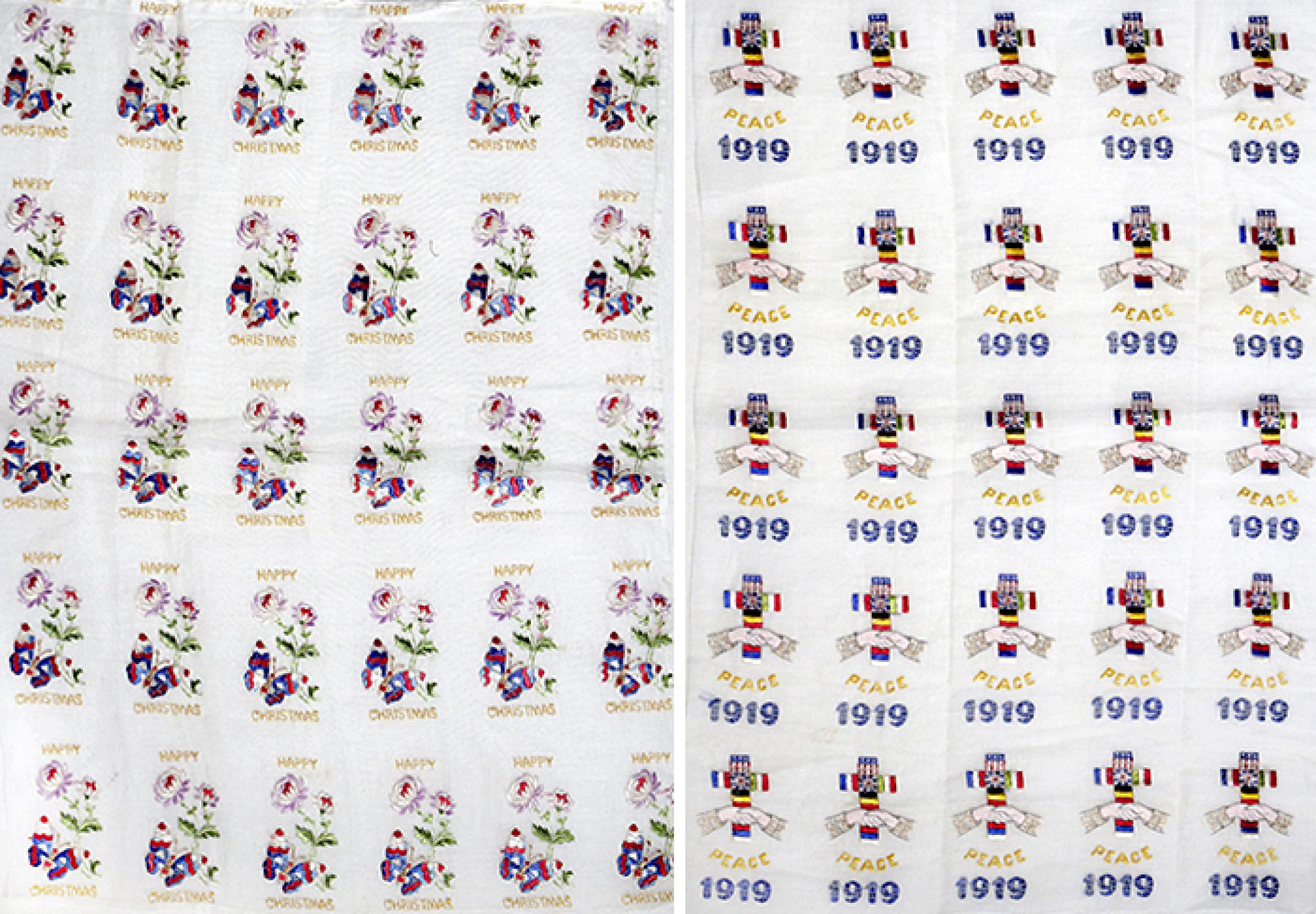 Nevertheless, whether completed by hand or machine, nothing can take away from the importance of these fragile pieces of history. Imagine the comfort a worried wife or mother would have received when one of these embroidered postcards dropped through the letterbox. It was a beautiful way to let her know that the sender was alive and thinking of her. 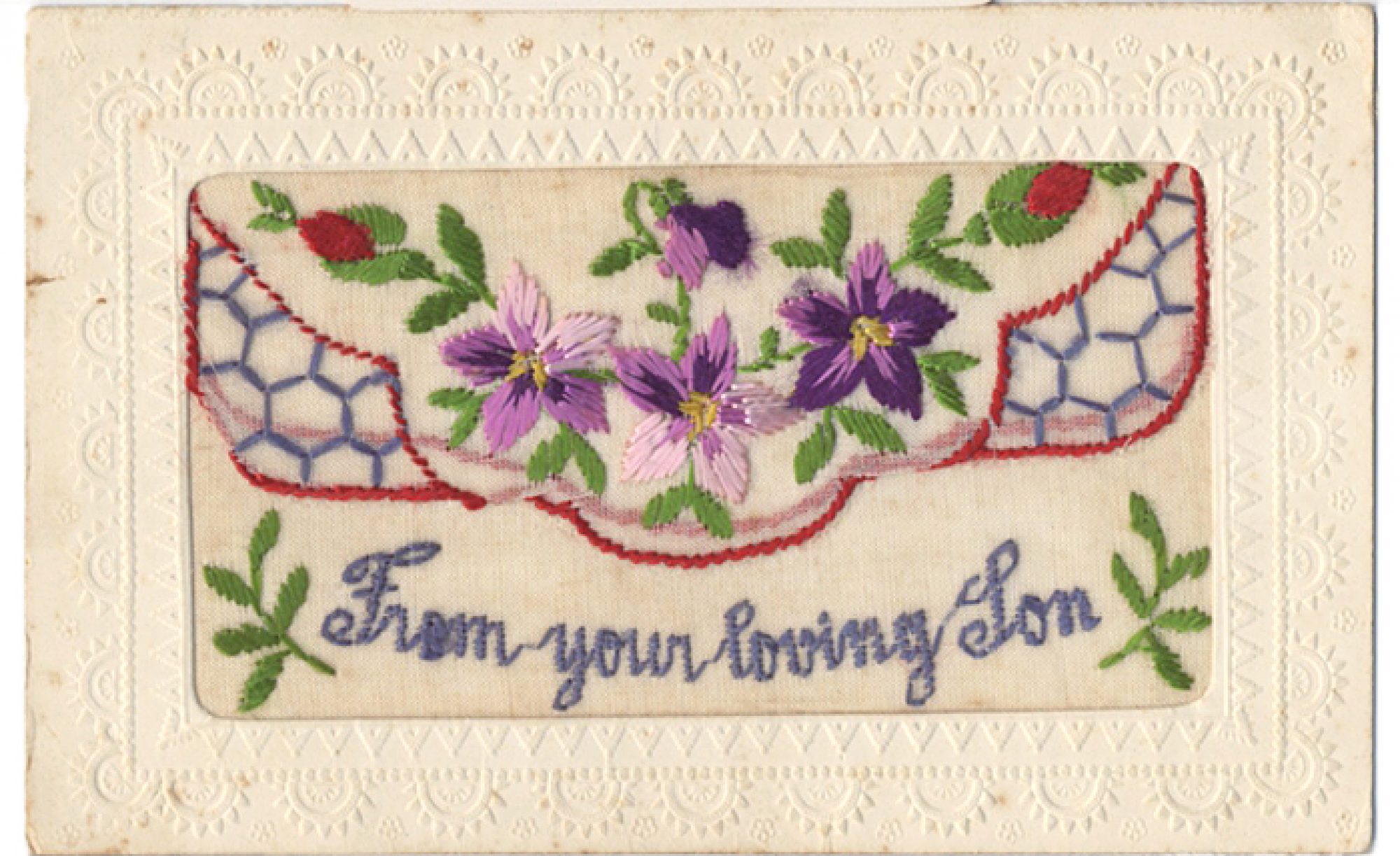 One of the props used in the photo shoot for ‘In Flanders Fields’ from issue #99 is an original WWI stitched post card? 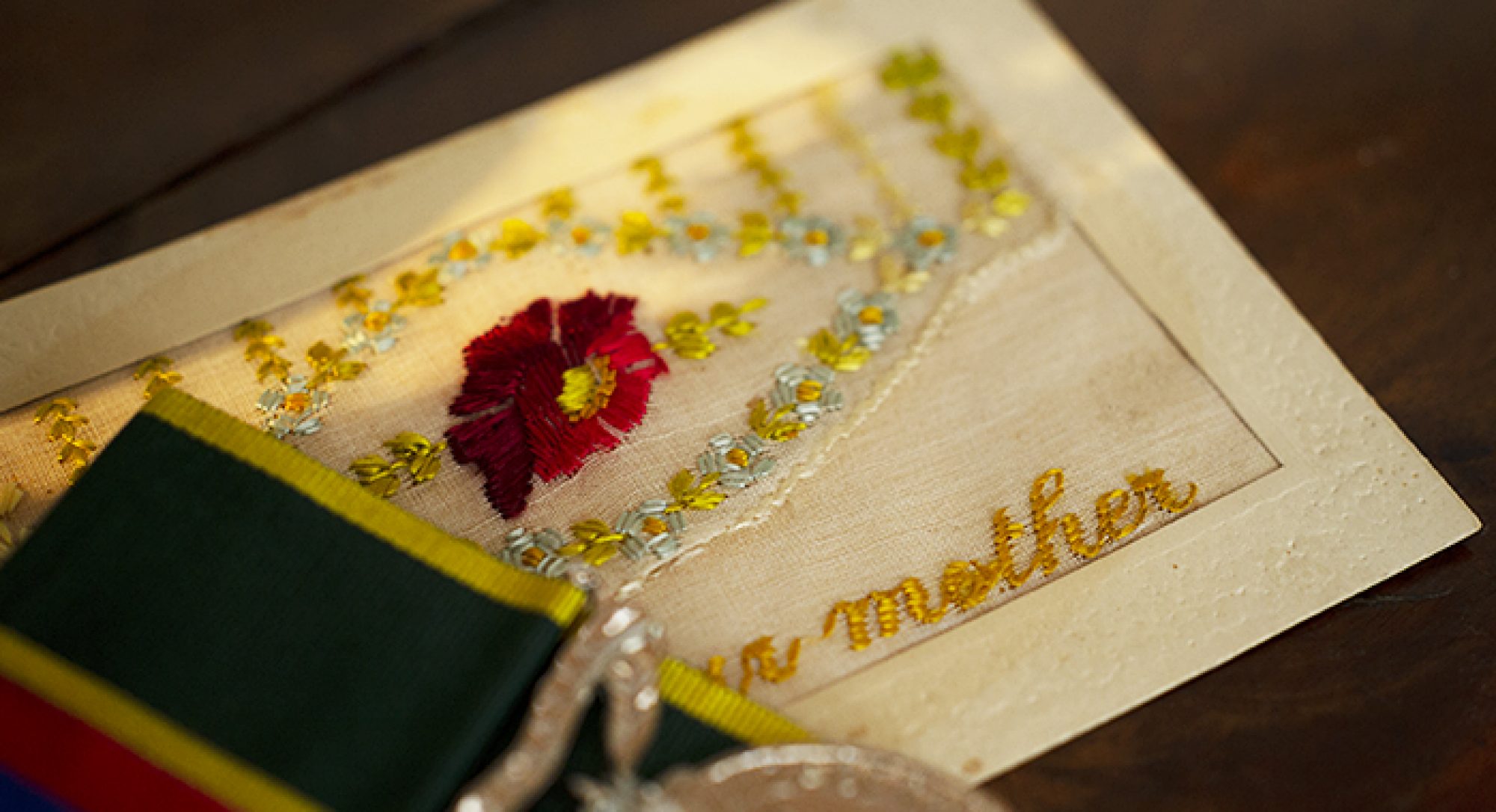 Special thanks to our stylist Fiona Fagan who does an incredible job finding the most amazing accessories and tiny treasures to help bring the photos in the magazine to life.