Inspired by the small world that Rose Andreeva created with a dimensional snail approaching a strawberry plant in her miniature garden scene ‘Small World’ in Inspirations issue #102 HERE, we were stirred to share the smaller things that have been created with the needles and threads of the Inspirations Community…

‘For my pochette (which translates to ‘wallet’ from French), the kits I started with were only small measuring just 13 cm (6”) round. So, what to do with them without framing them?!

I ended up finding an old clasp in a flea market, used some black velvet and added some patterns around the edges of the embroidery.’ 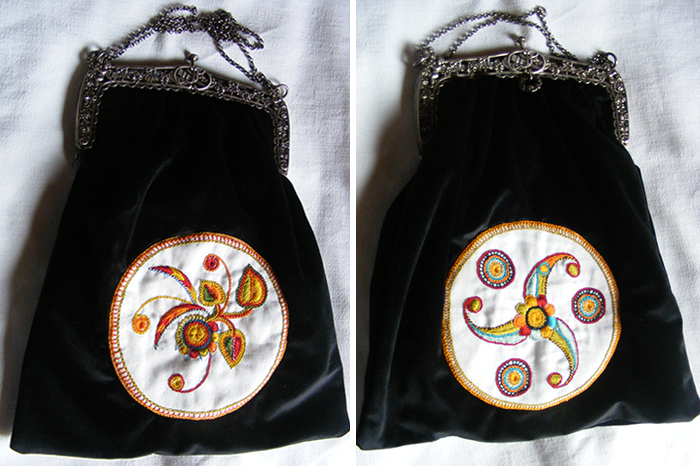 Francoise, we love the creative way you’ve used your embroidery to embellish an evening bag. What a gorgeous addition to your wardrobe!

‘I belong to The Embroiderers’ Guild, Queensland, Southport branch. In 2018, The Embroiderers’ Guild, Queensland Inc., celebrated its 50 Year Anniversary. A lasting reminder of the Anniversary has been the creation of The Celebrate Embroidery Panels which all members of the Guild were invited to contribute to. Three panels with a total of 189 squares were created in total. I contributed an embroidery based on Stumpwork by Jane Nicholas.’

Keryn, what a fabulous way to celebrate such a significant milestone! We love that everyone’s small squares were brought together to create panels with so much impact.

‘I’ve been in and out of the doctors’ offices a lot lately. I hate having to wait without something to do, and my normal projects are too big to carry around with me, so my solution was to design some tiny Stumpwork butterflies to work on. 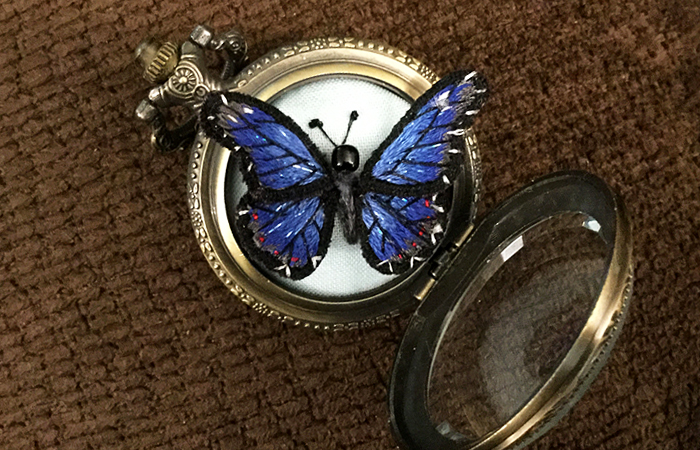 They are 1 1/2 inches (4 cm) wide by 1 1/16 inches (3 cm) long. However, I’d like to make them a little smaller because I want the pocket watch frame to close. I can fit the hoop and a selection of threads into a quart freezer bag which fits inside my purse.’ 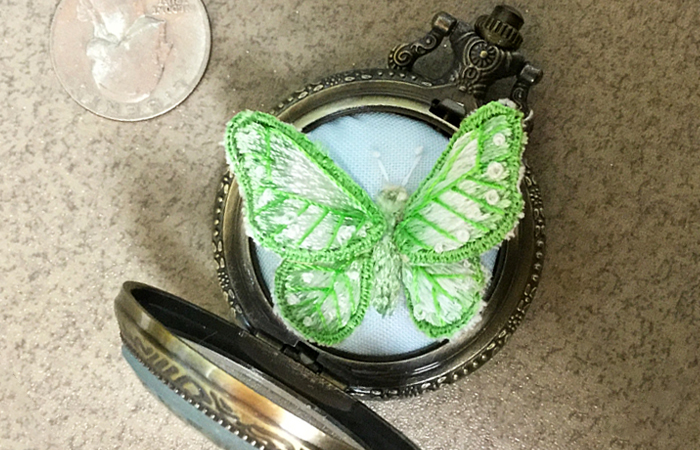 Nina, they say necessity is the mother of invention! We love that you found the silver lining in the time you were spending at doctors’ offices and have created something with needle and thread that are gorgeous companions to your Flights of Fancy project that appears in Inspirations issue #102 HERE.

‘Part of my range of art includes brooches made with printed cotton/linen folded down into a metal brooch holder. Usually every winter I would settle down to creating crocheted projects, but now need to take this easier due to a weak shoulder. Last year I was itching to do some hand work and decided to have a go at embroidering some of these brooches.

I had to remember high school lessons and was amazed how it came back to me!

The first few were a simple stitch here and there to give a little three-dimensional character to the brooches. 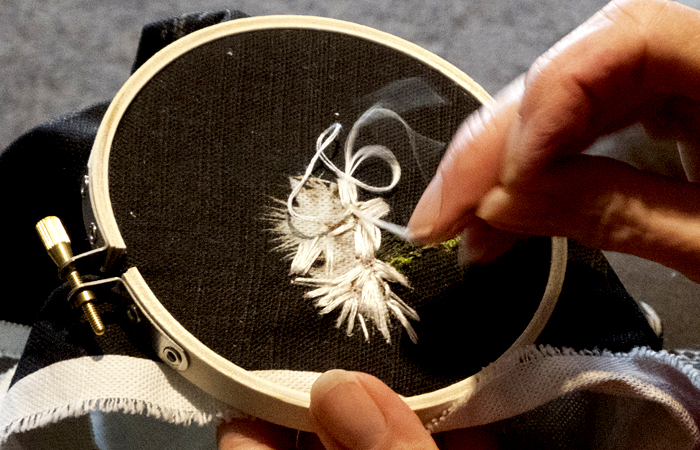 However, I have slowly added more detail to the point I feel I am hand colouring my images not with pastels or pencil, but with colourful thread. The main stitches I use are back stitch and French knot, but I hope to try new stitches in the future.’

Sharon, we love that you embraced your change of season from crochet to embroidery and that your embroidery lessons from high school came back so easily! You’ve created gorgeous pieces of wearable art.

Good things really do come in small packages! Have you created something tiny with your needles and threads? We’d love to see it! Email photos of your ‘small world’ along with a few details about your stitching journey to news@inspirationsstudios.com