Conflict. It appears to be etched into the DNA of humanity. It started with Cain and Abel back in Biblical times and continues even today in our modern ‘civilised’ world, where some days it can feel as if conflict is all around us.

Thankfully we have the escape of needlework to distract us where peace and tranquillity abound, and conflict only exists when our needles misbehave!

This week we’re looking at the iconic Tudor Rose which has become an emblem synonymous with unity and peace. 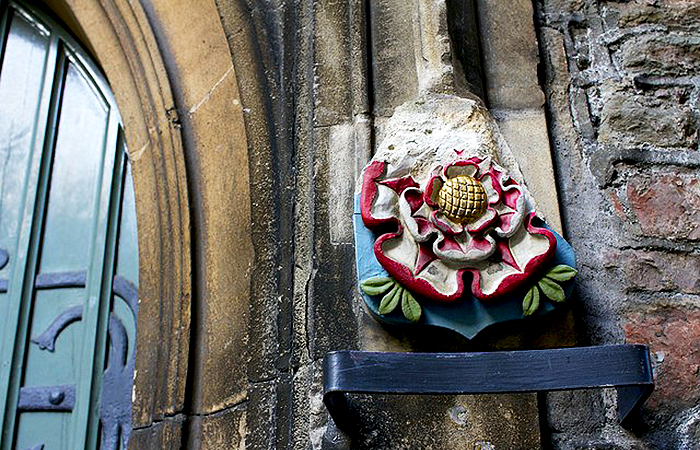 To fully appreciate it’s meaning, we need to take a quick trip back in time to 1455, when Richard, Duke of York forceably became King of England by overthrowing Henry VI thus triggering a civil war between two families: House of Lancaster and House of York.

Both families had heraldic badges at the time featuring roses – a white rose for supporters of the House of York, and a red rose signified allegiance to the House of Lancaster, hence this famous conflict became known as the ‘War of the Roses’.

Fortunately, it all came to an end in 1485 when the House of Lancaster asserted final authority over the throne by winning the Battle of Bosworth and Henry Tudor became king. To cement his rather tenuous claim over the throne, in an act of either blind love or strategic brilliance, Henry chose a bride from the opposing family and his marriage to Elizabeth of York united the warring houses once and for all. 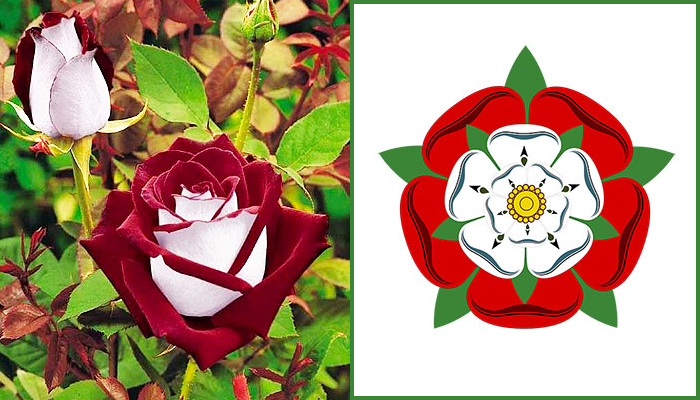 As victor Henry Tudor, now King Henry VII, needed a new emblem to replace the divisive red and white roses which incited rivalry, he blended both rose varietals together to create one of the very first hybrid rose species and called it the ‘Tudor Rose’. Ever since the magnificent red and white Tudor rose has been used to signify harmony and unity. 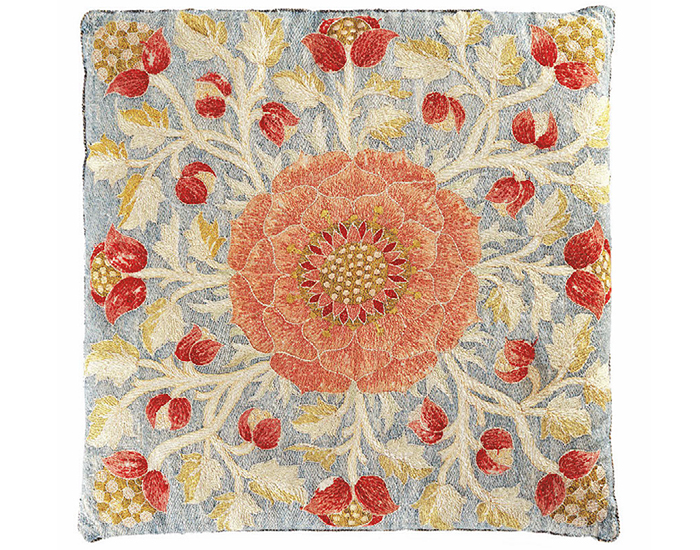 Tudor rose cushion by May Morris

Fast forward to 1892 and May Morris, daughter of William Morris, designed a striking silk embroidered cushion centred around the Tudor rose. Interestingly she was experiencing her own personal conflict during this time in her life with a marriage break down due to her affair with a former lover. Perhaps she was seeking the harmony the famous Tudor rose personified? 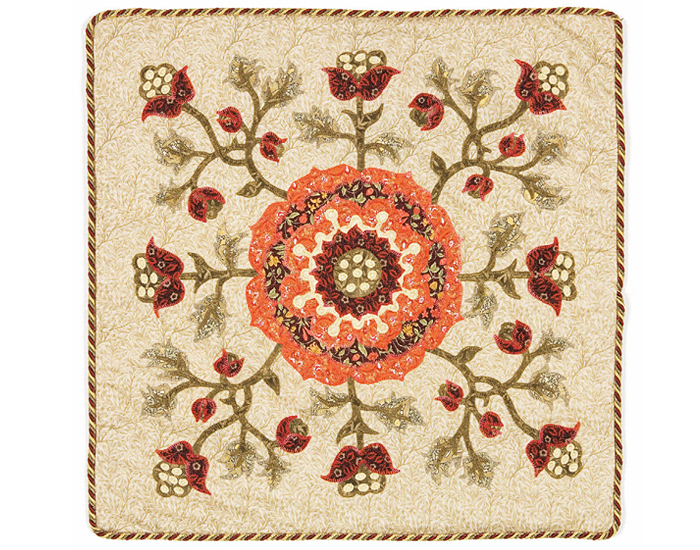 Fast forward now to present day and inspired by May’s gorgeous cushion, the talented designer Michele Hill has created her own rendition of the Tudor rose as an appliqué cushion which features in her book ‘William Morris in Appliqué’. 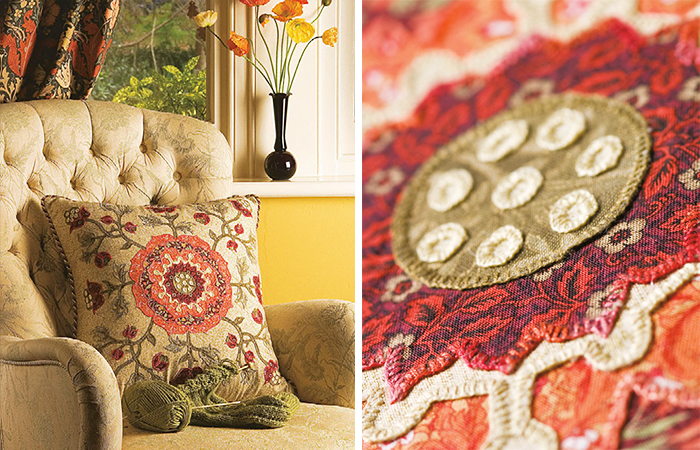 The large Tudor rose in the centre of Michele’s fabulous cushion, uses similar bold red and orange tones as May used in her piece. Small stamens of the flower are then accentuated against the light colour print of the ground fabric. The shapes are outlined by hand using two strands of thread for the blanket stitch to emphasize and add texture to the design lines and some shapes are outlined using a variegated thread for added detail. 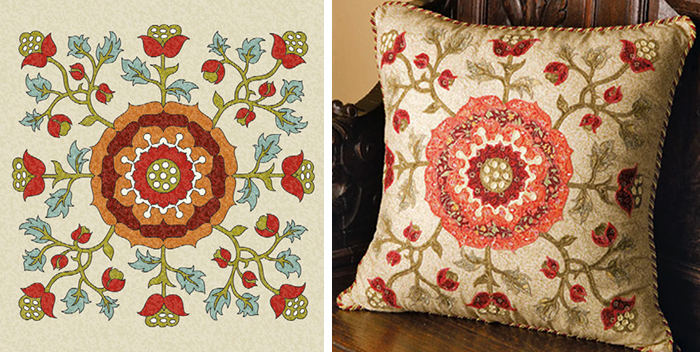 The finished cushion measures 50cm (20”) square and is both a wonderful homage to May Morris and a beautiful appliqué rendition of a Tudor rose.

Another extremely popular needlework project featuring the Tudor rose was created by our very own Susan O’Connor. 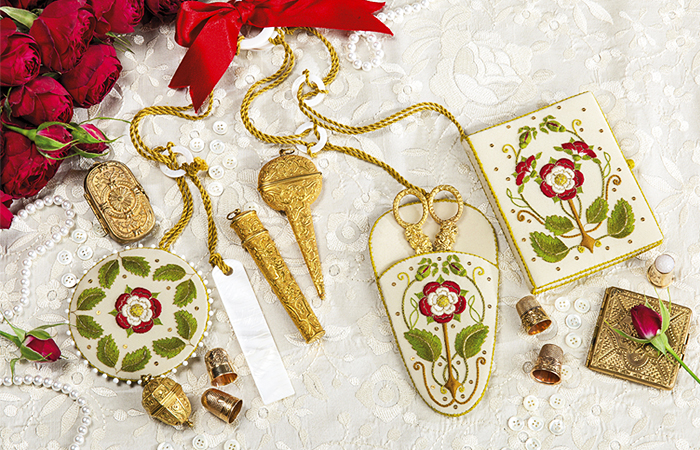 ‘Chatelaine’ first appeared in Inspirations issue #89 and went on to be one of our best-selling kits of all time. It’s popularity also meant printed copies of issue #89 sold out and it is now a rare issue – thankfully the project is still available as a digital pattern. 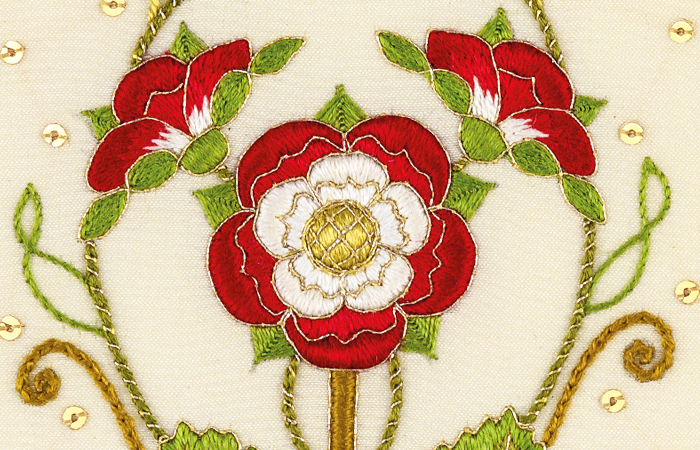 This elegant collection of scissor sheath, needle book and pinwheel comes in two different colour schemes, rich reds and creams for the Tudor rose and soft pinks and creams for Rosa eglantine.

Stitched onto silk satin with lustrous silk, metallic thread and sparkling paillettes, each piece is bordered with corded coral stitch and hangs from a gold twisted cord looped through mother of pearl rings. 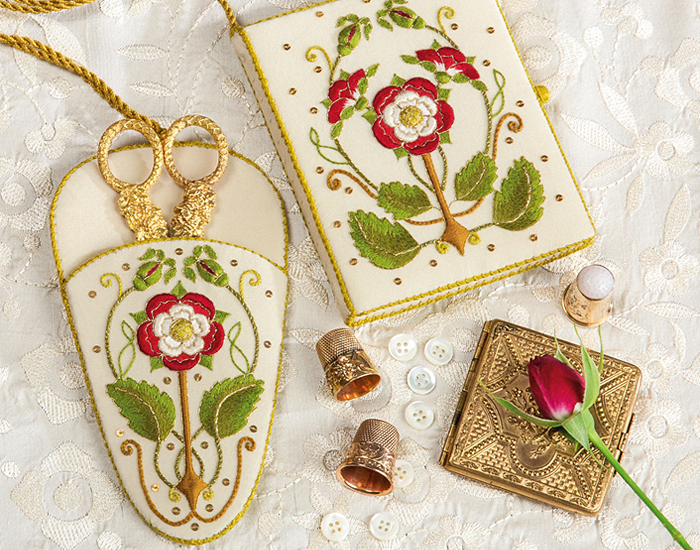 Out of a conflict 560 years ago, a magnificent symbol of unity and peace was birthed and has prevailed throughout history. What a wonderful legacy to use for creating beautiful needlework and a reminder that even out of deep conflict, lasting good can prevail.

Make Your Own Tudor Rose 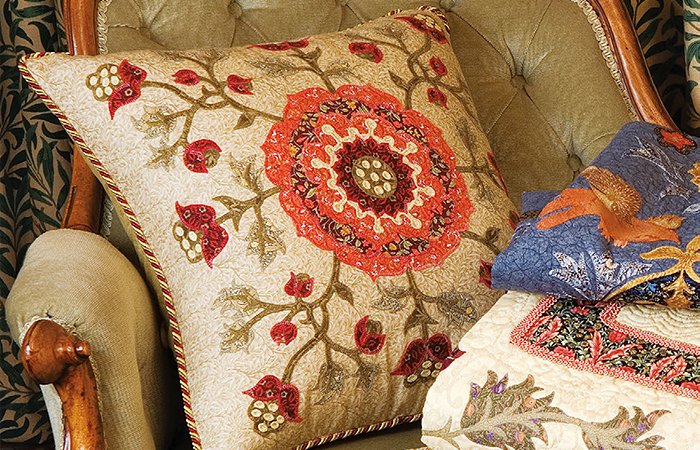 William Morris In Appliqué is the best-selling book by Michele Hill featuring William Morris inspired projects ranging from a cushion to a queen size quilt, suitable for quilters of all skill levels.

Keep your most precious sewing accessories together and close at hand by creating this elegant collection of scissor sheath, needle book and pinwheel.