Almost everyone is familiar with Britain’s Magna Carta, even if they are not fully aware of its content. Signed in 1215 to settle disputes between King John and the barons of the realm of England, although many of the clauses in the original document are now irrelevant or forgotten, the one which reinforced the idea of justice and a fair trial before the law continues to echo down through history.

For the celebration of the 800th Anniversary of the signing of the Magna Carta, British artist Cornelia Parker proposed an ambitious project. Her idea was to embroider a 15m x 1.5m version. But she didn’t want to recreate a version of the actual document itself – rather she proposed to embroider the Wikipedia entry for the Magna Carta in its entirety. 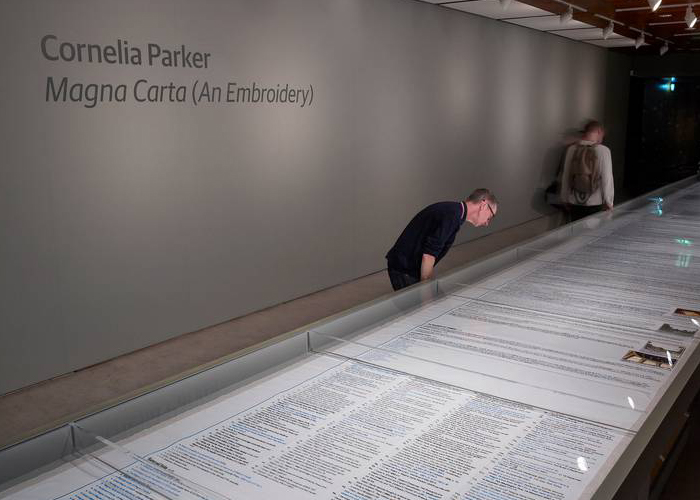 The embroidered Wikipedia entry for the Magna Carta (source)

Parker, an artist known for subverting the perception of everyday things, recognised that the fulfilment of this enormous project would require many hands.

But the hands that stitched were part of the story, so her embroiderers were chosen with care.

The task of recreating each image appearing on the right-hand side of the Wikipedia page was given to the Embroiderer’s Guild in Britain. Parker wanted these to be stitched by talented embroiderers who stitched for passion rather than as a profession.

The text, however, was broken up into strips and sent out to 14 prisons around Britain, to be stitched by prisoners involved in the charity Fine Cell Work.

Here at Inspirations Studios, we’re avid supporters of the amazing job Fine Cell Work do throughout the UK by training prisoners in the skill of creative needlework, which in turn helps them earn money from the finished pieces they make during the long hours spent in their cells.

This fosters hope, discipline and self-esteem which in turn helps them to connect to society and leave prison with the confidence and financial means to stop offending. Parker herself expressed how neat and precise the embroidery from the Fine Cell Work participants was. 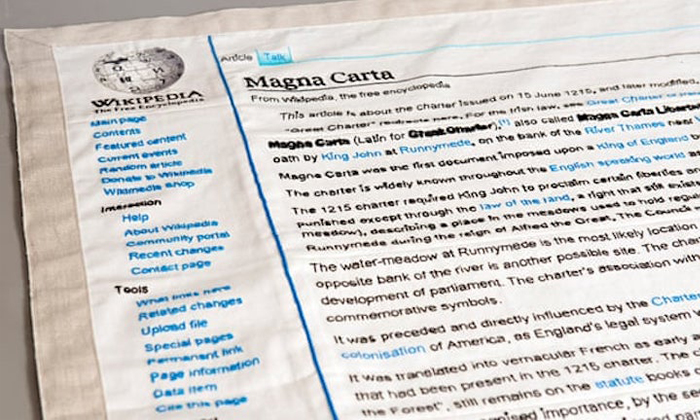 Certain words from the manuscript were blocked out so that Parker could invite particular people to stitch them. Words like ‘freedom’, ‘liberty’ and ‘contemporary political relevance’ were then stitched by judges, human rights lawyers, journalists and civil servants, sometimes skilfully, sometimes not.

This gigantic work is currently on display at The Museum of Contemporary Art in Sydney, Australia, and it is breathtaking. The highlights included the Or Nué interpretation of the image of Pope Innocent III, the exquisitely stitched Wikipedia logo and the picture of the original Magna Carta which, from a distance looks almost photographic, but on closer inspection is made up of perfectly placed and perfectly coloured straight stitches. 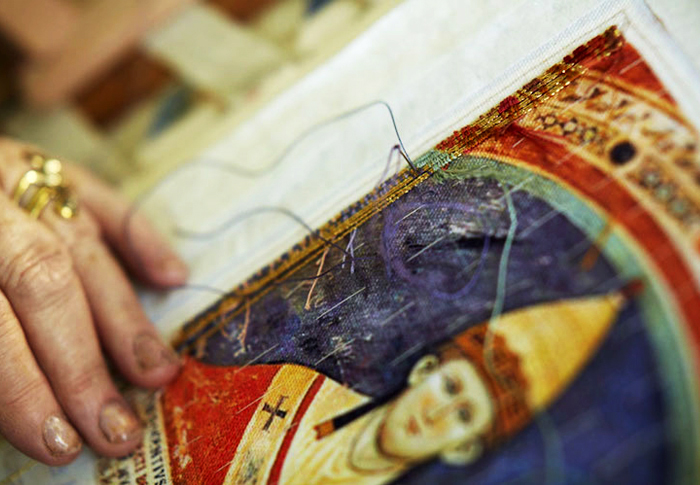 Furthermore, the work is displayed with a mirror beneath it so the viewer can inspect the back of the piece with as much care as the front – something Cornelia Parker does frequently in her art. You can spend hours there.

It is breathtaking to see what can be achieved by many hands, as well as to marvel over the simplicity of the idea and the brilliance of the execution. In a throwaway, fast-paced world, such a laborious, lasting work of art is a pleasure to behold.