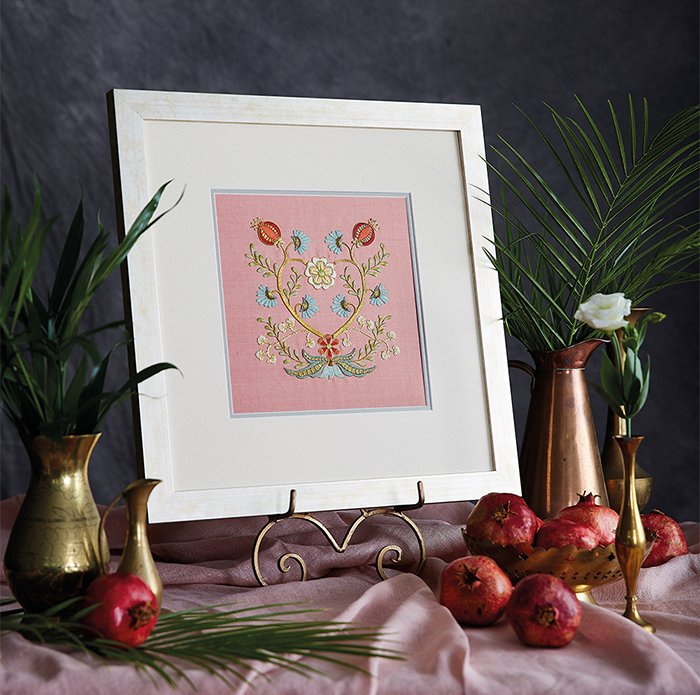 Whilst doing research for this article, we began to realise that Anna is a bit of a quiet achiever – we knew she was amazing, but when you put it all together in one place you realise just how amazing she is.

Anna graduated from the Danish Needlecraft Guild College with honours in technical hand embroidery and began designing and teaching embroidery soon after. She also worked on projects such as ecclesiastical vestments in Denmark, including the bishops cope for Aarhus Cathedral, Denmark designed by Queen Margrethe II.

After moving to Australia, Anna joined the team at Inspirations working in various capacities including editing numerous books until eventually taking on the role of Editor-In-Chief for Inspirations Magazine from issues 71 through to 81. During her 11 years with us, Anna’s gorgeous designs featured in several publications, including over 20 projects in Inspirations Magazine itself.

From there Anna went on to establish her own business ‘Fine Stitch Studio’ where she works today continuing to create spectacular pieces that she sells as patterns and kits, as well as travelling the world as an accomplished tutor. 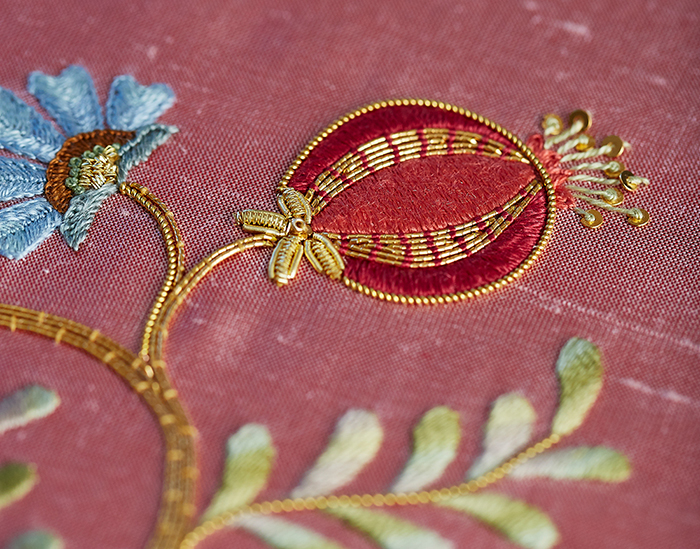 It was our privilege to have Anna teach at Beating Around the Bush recently, and we caught up with her to have a chat about the project Pomegranate & Rose.

How did this amazing design come about?

‘When Susan O’Connor (Inspirations’ current Editor-in-Chief) contacted me to discuss a project for issue #100 of the magazine, she suggested a colourful piece of silk and goldwork would be wonderful to see. Thinking back to the design I did for the original cover of A-Z Goldwork book, which was also used for the Beating Around the Bush 2014 logo, I decided to try and design something along similar lines.’ 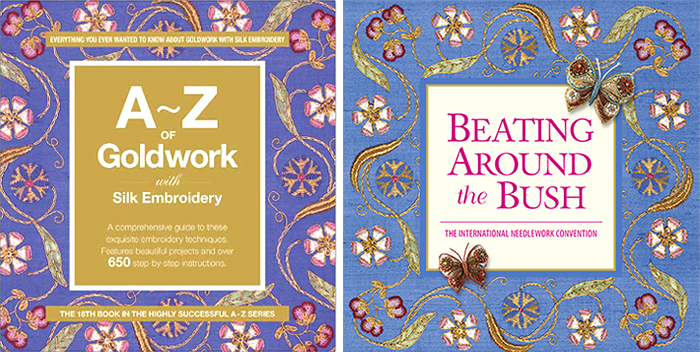 ‘I really admire the embroideries on 18th century costume. It is delicate and colourful, and I guess that admiration is the underlying inspiration for the design. When drawing this one, I was thinking shapes and texture of stitches more than any particular flowers or fruit and then used lines and scrolls of gold to tie it all together.’ 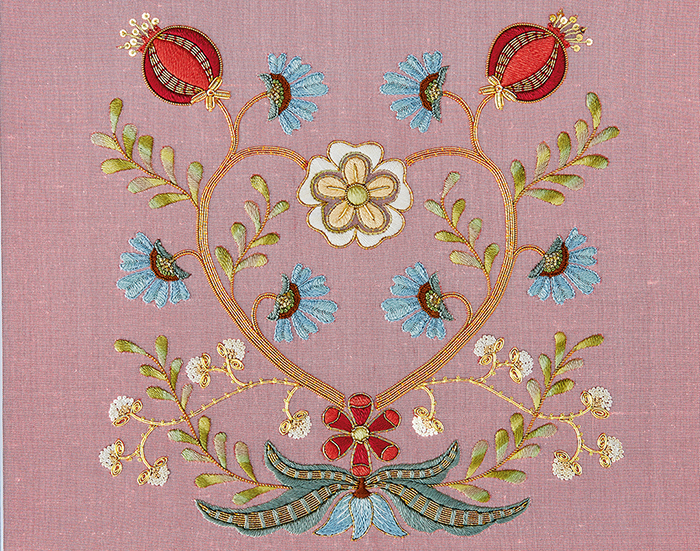 For those of us who are thinking about stitching this project for ourselves, do you have any tips or tricks you can share with us?

‘When there’s repeated motifs within a design, I always complete all the same motifs at the same time. It is much easier to get them looking the same than if you stitch one, then do something else and then try and repeat the same motif days, weeks or months later. This is particularly important with symmetrical designs such as Pomegranate & Rose.’ 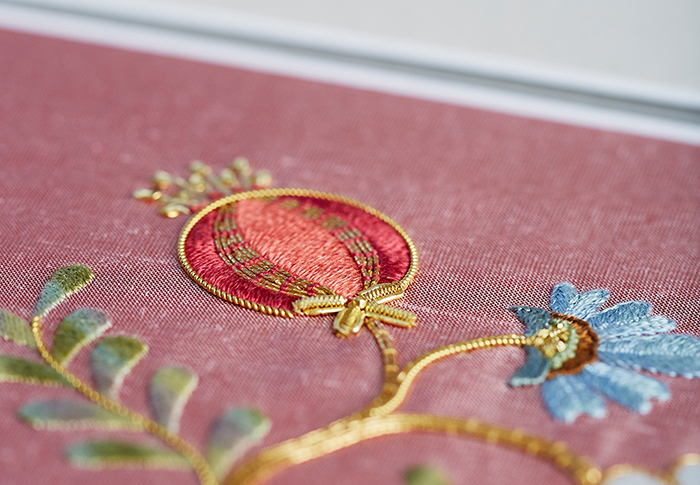 Looking back to your involvement in Inspirations Magazine over the years, do you have any special moments or memories that come to mind?

‘My best memories of Inspirations are not so much the magazine itself – it is the people. All you guys, former colleagues, the readers and all the contributors. The interaction and coming together of likeminded people that is what makes it special.’

Thank you, Anna, for the extraordinary body of work you have contributed to the needlework community over the years. Your designs have inspired us, your needlework wowed us, and your tutoring has enlightening us, we are forever grateful to have you part of the Inspirations family. 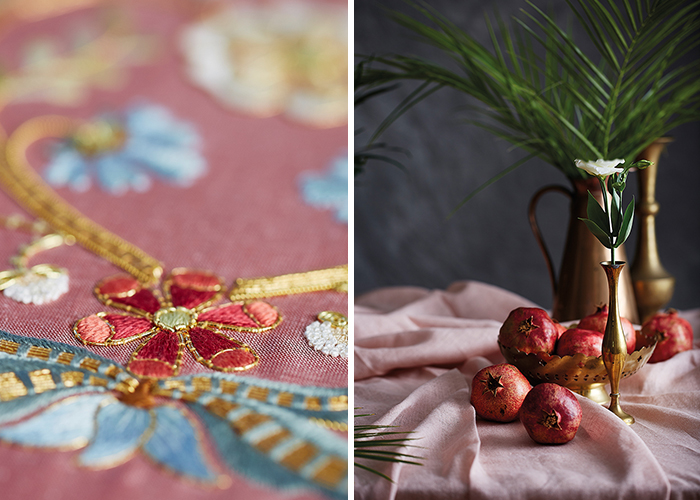 Learn about Colour with Anna

In January next year, Anna will be teaching a workshop on choosing colour at the Embroiderer’s Guild of South Australia. The aim of the workshop is to give people a few guidelines and tools to help stitchers who are often ‘scared’ to alter or change colour schemes in a design.

Students will be stitching a given crewel design but choosing and using their own colour scheme. When Anna last did this workshop, she said it was amazing to see the very different results from the same design.

Everyone is welcome to attend, for details visit www.embguildsa.org.au

Also, you can check out more of Anna’s work on her website HERE and browse her kits and patterns on her ETSY shop HERE.

Make Your Own Pomegranate & Rose 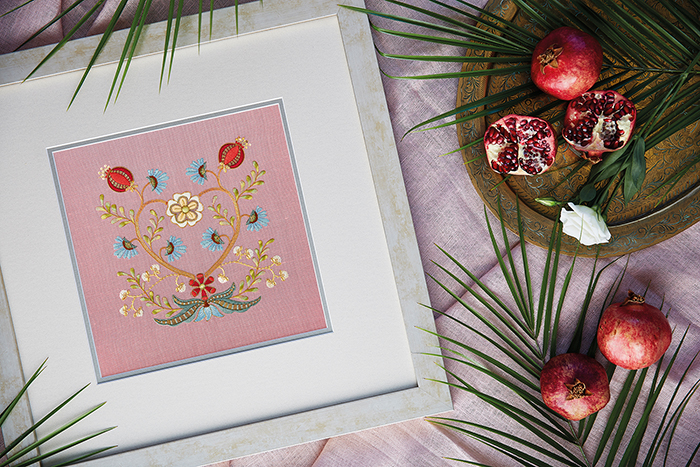 Pomegranate & Rose by Anna Scott is a superb silk and goldwork design of flowing stems laden with fruit and flowers.