For those of us who fell in love with Jenny McWhinney’s Monet the Mouse when he first appeared way back in 2003 in Inspirations issue #38, and then again three years later in issue #51, it’s been a lot of waiting, hoping, waiting, hoping… until now.

Some of us never thought this day would come, but it is with much fanfare and excitement that after 12 years, we now have a third book in the ‘Adventures of Monet’ series. 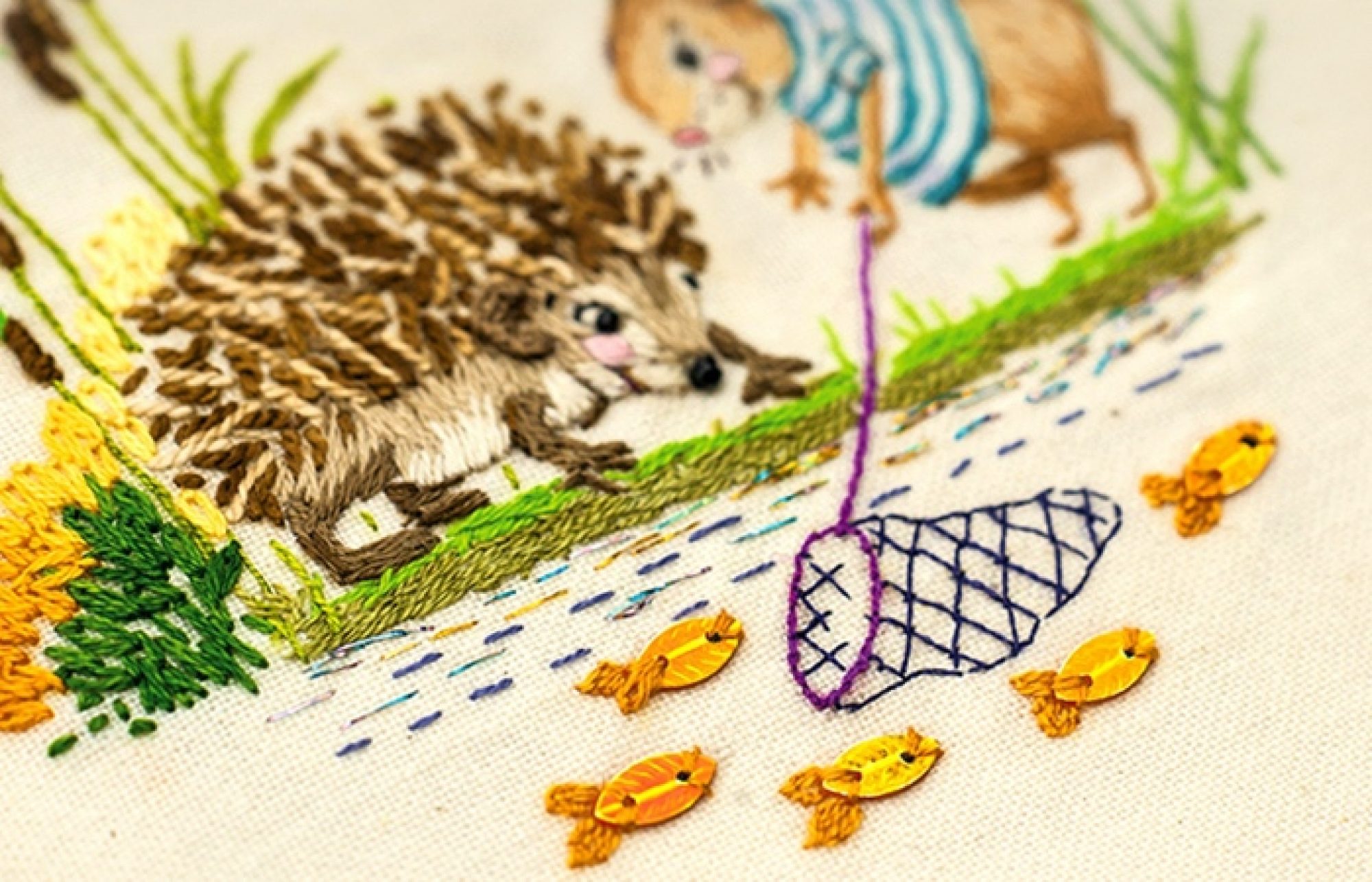 ‘Monet, Hugo et les Poissons d’Or’ (Monet, Hugo and the Golden Fish) is a special project Jenny worked on especially for Inspirations issue #100 and this week we have the great honour of handing over the microphone (or in this case keyboard!) to Jenny who shares with us the backstory not only to Monet himself, but also a rare insight as to the how, where and why this incredibly talented artist creates her incredibly popular characters.

#1 Flowers for Grandmother; #2 Monet and the Yellow Paper; #3 Monet, Hugo and the Golden Fish

‘Ever since I was a young child, sketching and painting has been my first passion, with the second being stitching. Both of these creative outlets seemed to go hand-in-hand so organically. I see the characters I imagine and bring to life through painting and stitching as my puppets.’ 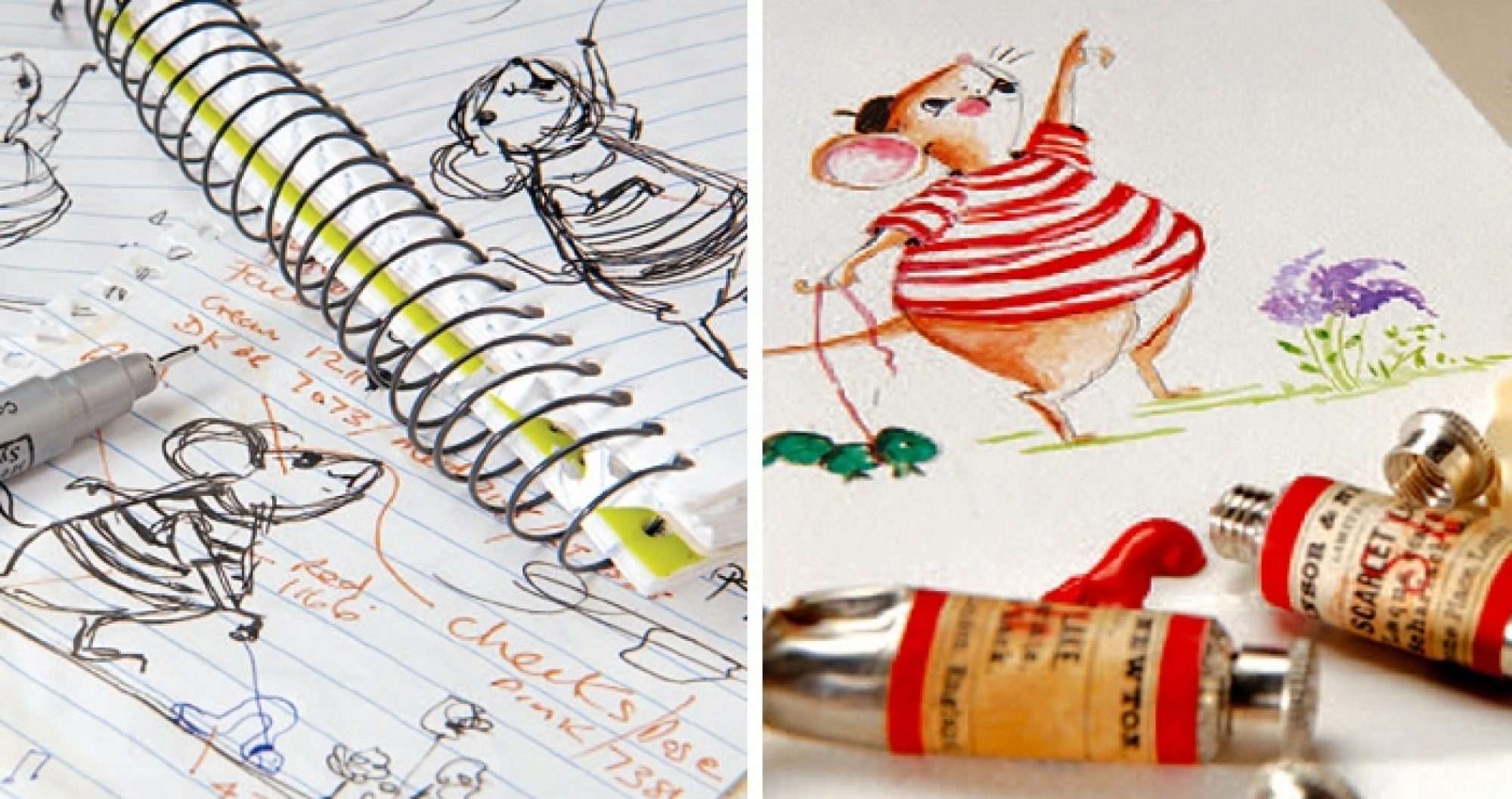 ‘Puppeteers use their puppets to express personal thoughts and ideas. The puppet acts as the perfect vehicle to express the puppeteer’s thoughts, feelings and unique perspectives, while getting an artistic message out into the world.

Much like the puppeteer, nothing brings me more joy than using my creations to pass on an idea, message, or just make someone smile.

Placing my characters into imagined scenes or taking them on any kind of fantastic adventure expands their personalities and gives them their own special backstory.’ 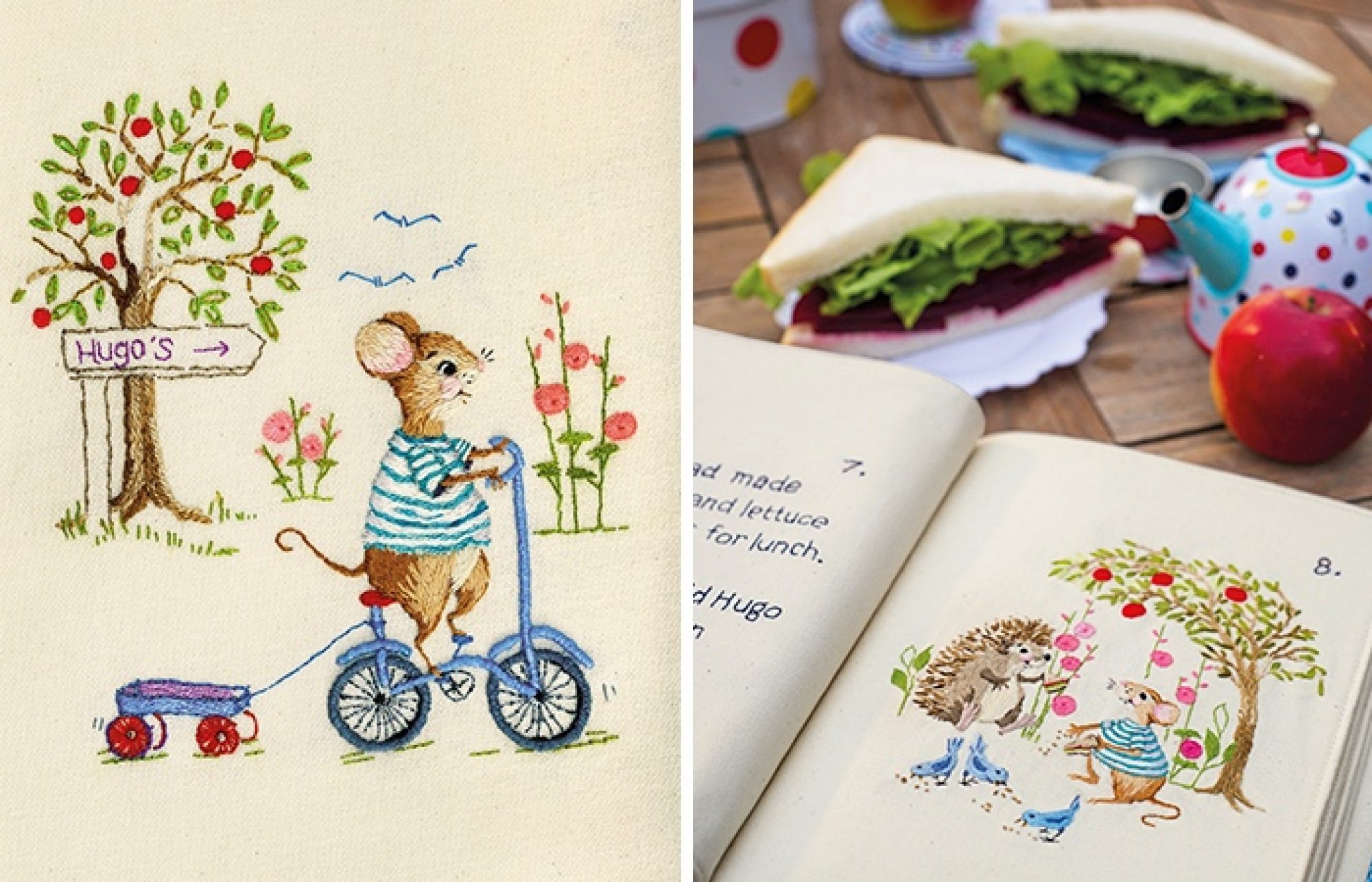 ‘I create directly from mother nature. For example, if I want to create a wombat or a reindeer, I will use multiple reference photos of the animal and study the skeletal structure. Once I know the anatomy of the creature, and how it is constructed from the inside out, drawing him in any position that my idea requires becomes much easier. By understanding the way the creature moves, I am able to pose him as I wish, to suit whatever I imagine his backstory to be, and whatever message I wish him to convey.’ 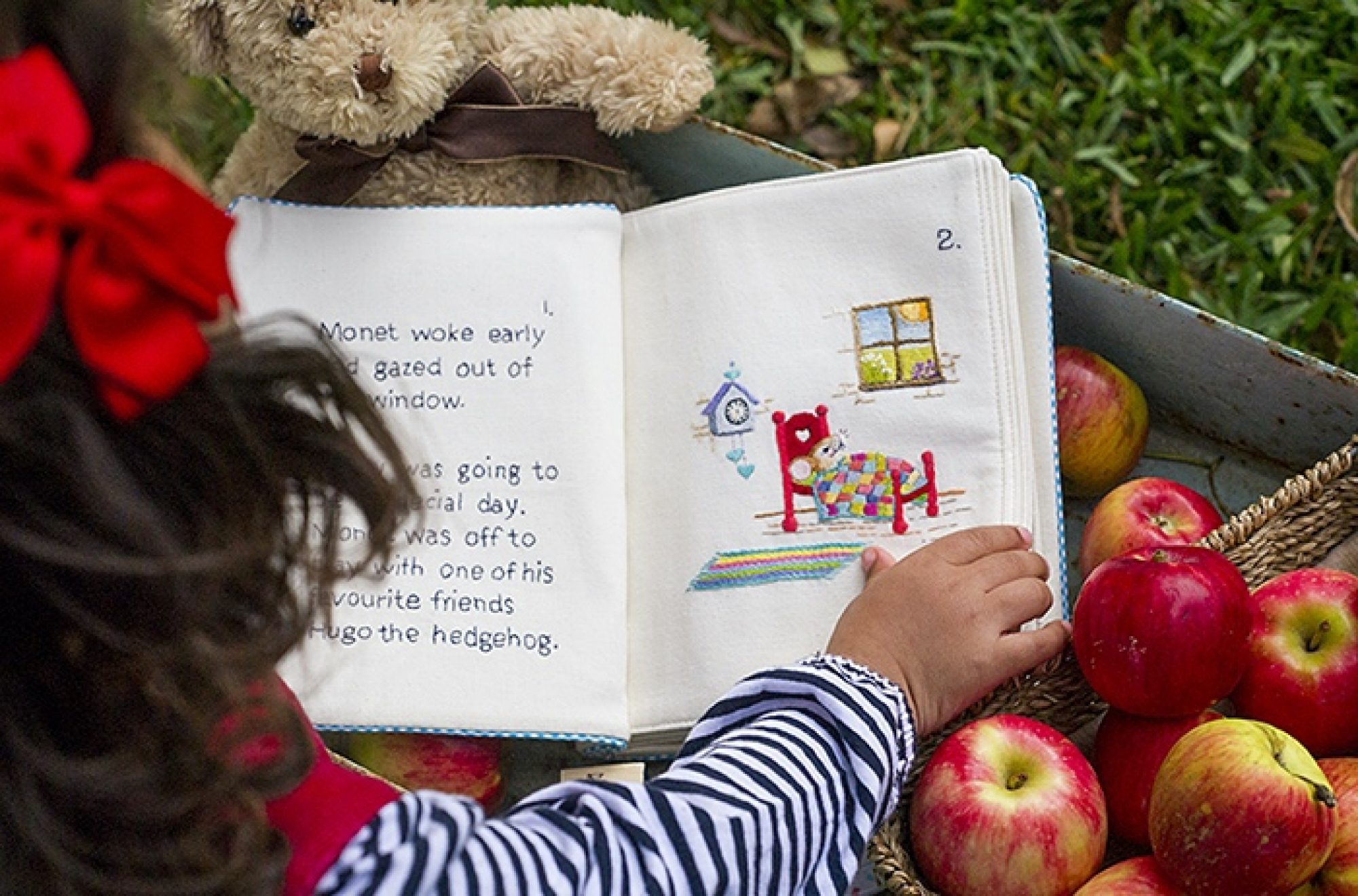 ‘The concept of my ‘Monet’ series all started with one single image – just a tiny mouse lying in his quaint little bedroom. I enjoyed stitching him so much I thought I would do another image – the same mouse character picking flowers in an English garden. After the second image, I had to decide what to do with Monet and his developing story.’ 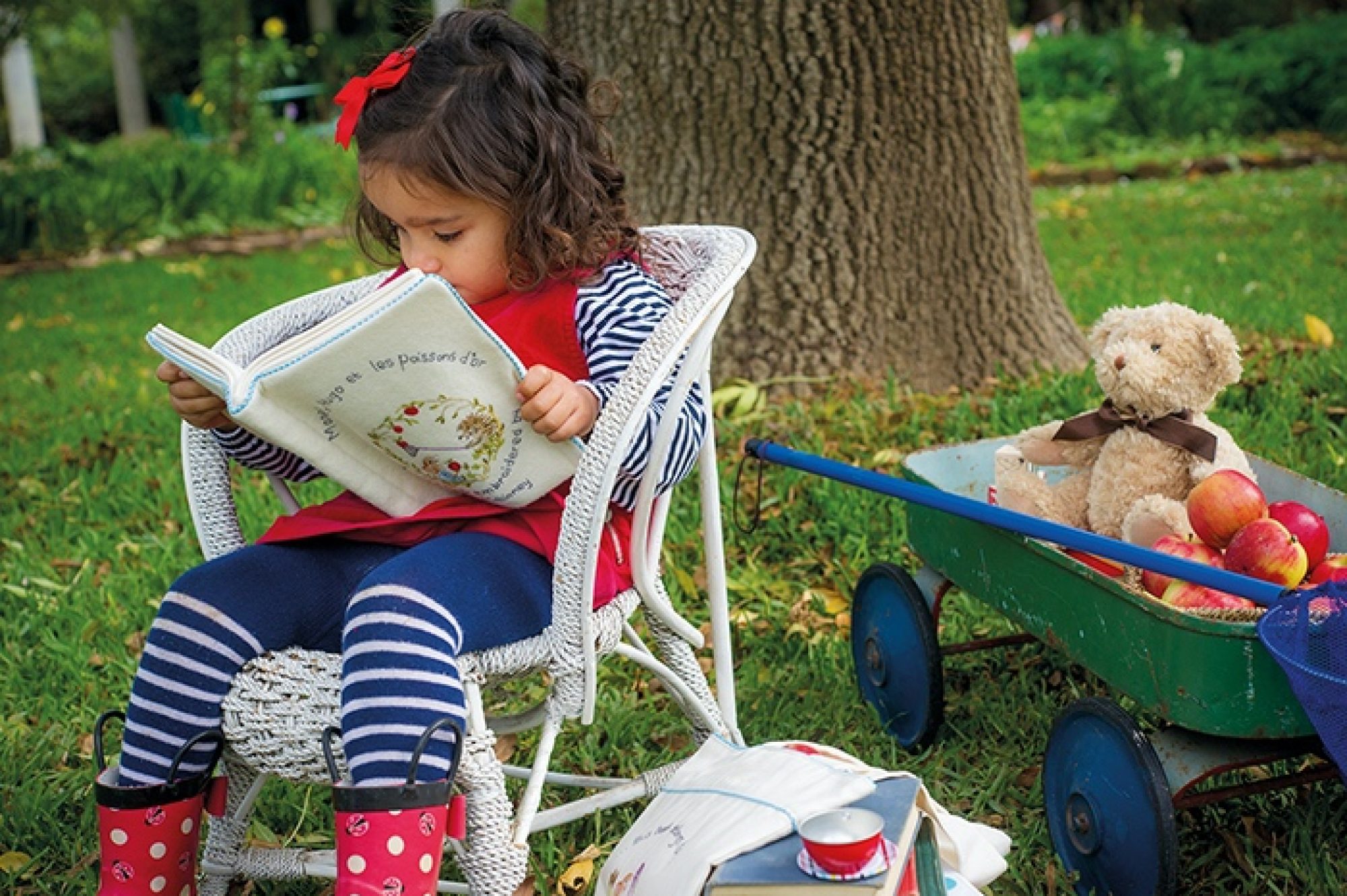 ‘A little ‘cloth book’ seemed the obvious choice. Gradually working on the individual pages of the book was extremely rewarding, seeing Monet’s adventure stitched into reality. Completing each page gave me a feeling of achievement and kept me excited to see where the story would end until eventually the first book of the series ‘Des Fleurs Pour Grandmere’ (Flowers for Grandmother) was finished.’ 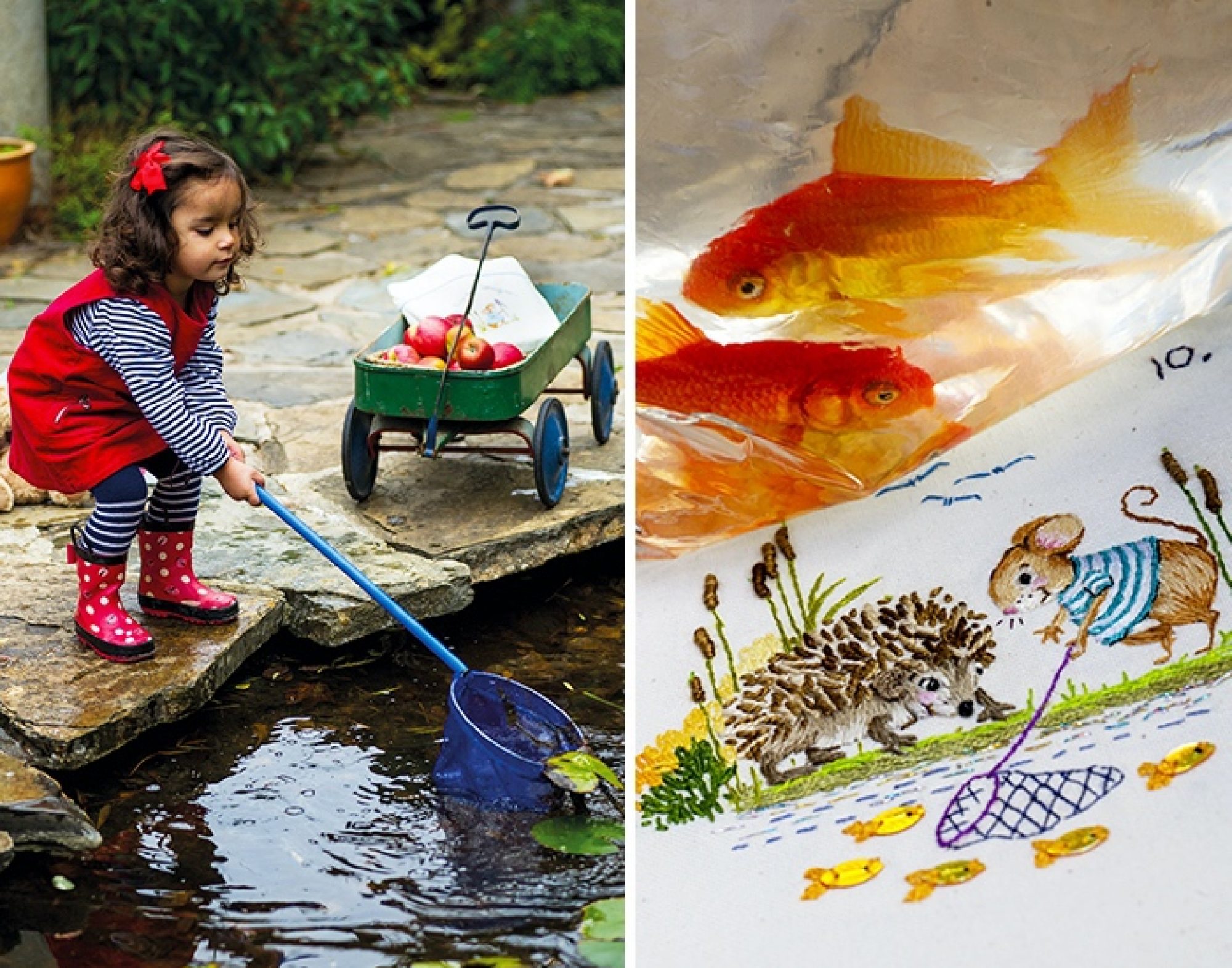 ‘Observation is the best way to collect inspiration. Just observe, and you can collect endless ideas and inspiration. Toddlers and young children are a massive influence on my characters, they are so funny and so honest. Without any inhibition as they are still finding their own unique pathways in the world. I adore their comical chubby hands and lack of balance as they learn to manage their limbs just like baby elephants and other animals.’ 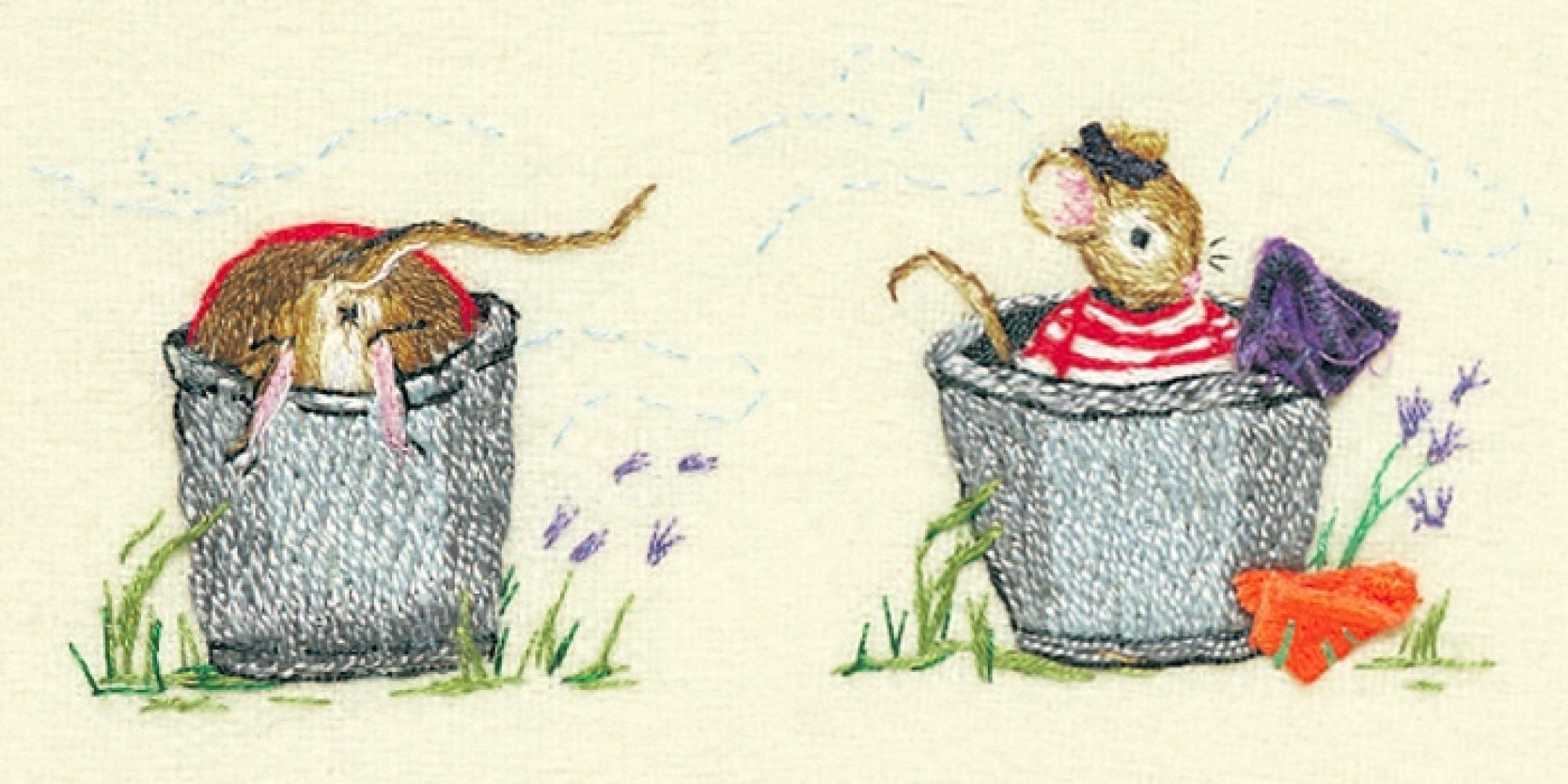 ‘I owned some little mice for quite some time and would let them run around my desk amongst my pencils and books, and sketch them as they investigated their surroundings. They are (as are all animals) fascinating to watch as they go about their own business, in their own miniature worlds. I remember the first time I watched one climb over the day calendar on my desk – legs all over the place – she was very undignified but wouldn’t give up. I recalled this image when I sketched Monet falling into the rubbish bin in my second Monet book ‘Monet and the Yellow Paper’.’ 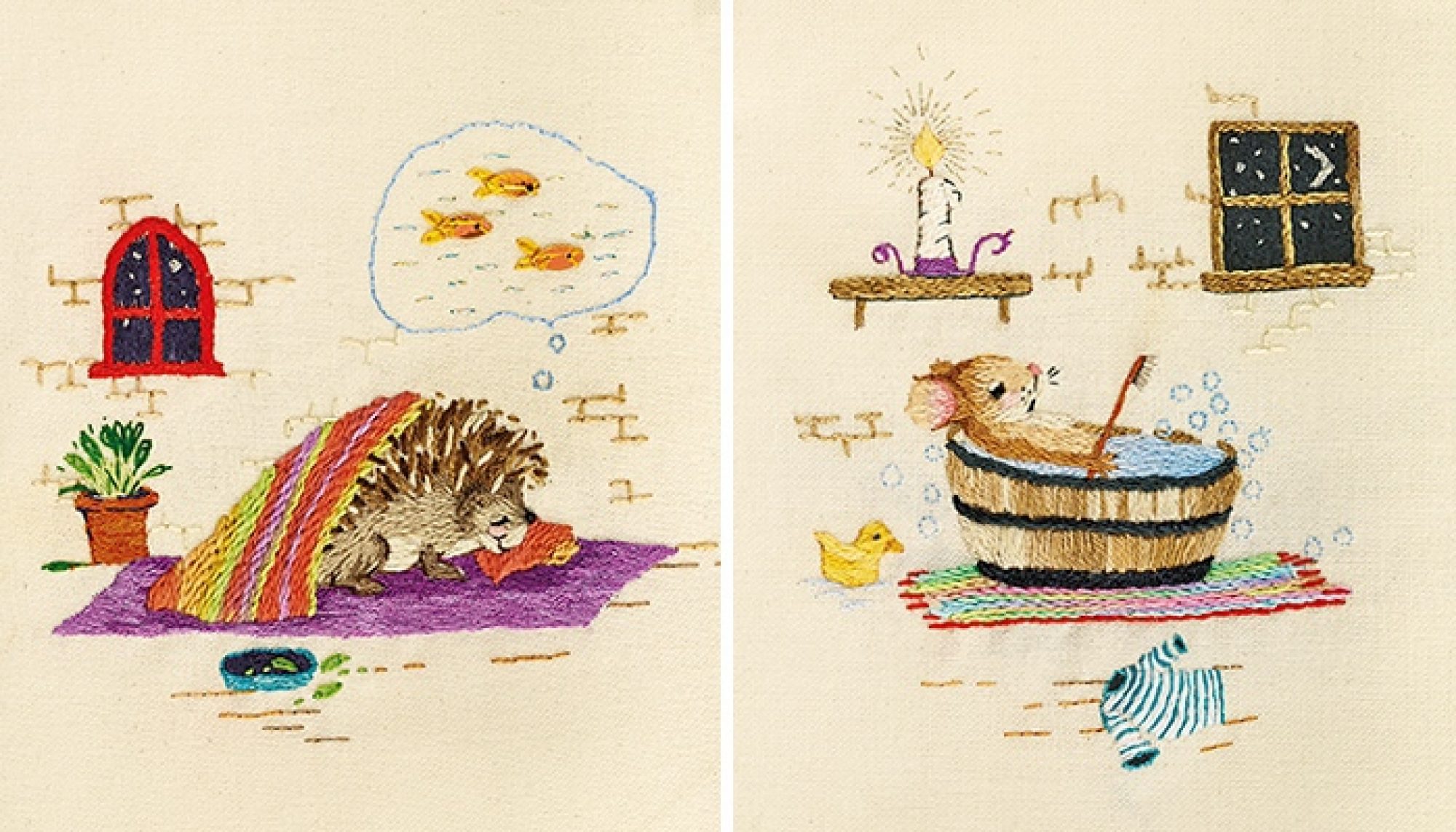 ‘In Monet’s newest tale, ‘Monet, Hugo and the Golden Fish’, I was hoping to explain to the new generation that we need to look after the natural resources we have, caring for the environment, and the importance of small acts of kindness. Monet’s acknowledgement of the shiny golden fish was my way of expressing to the tiny reader that even a small act of compassion can make a difference.’ 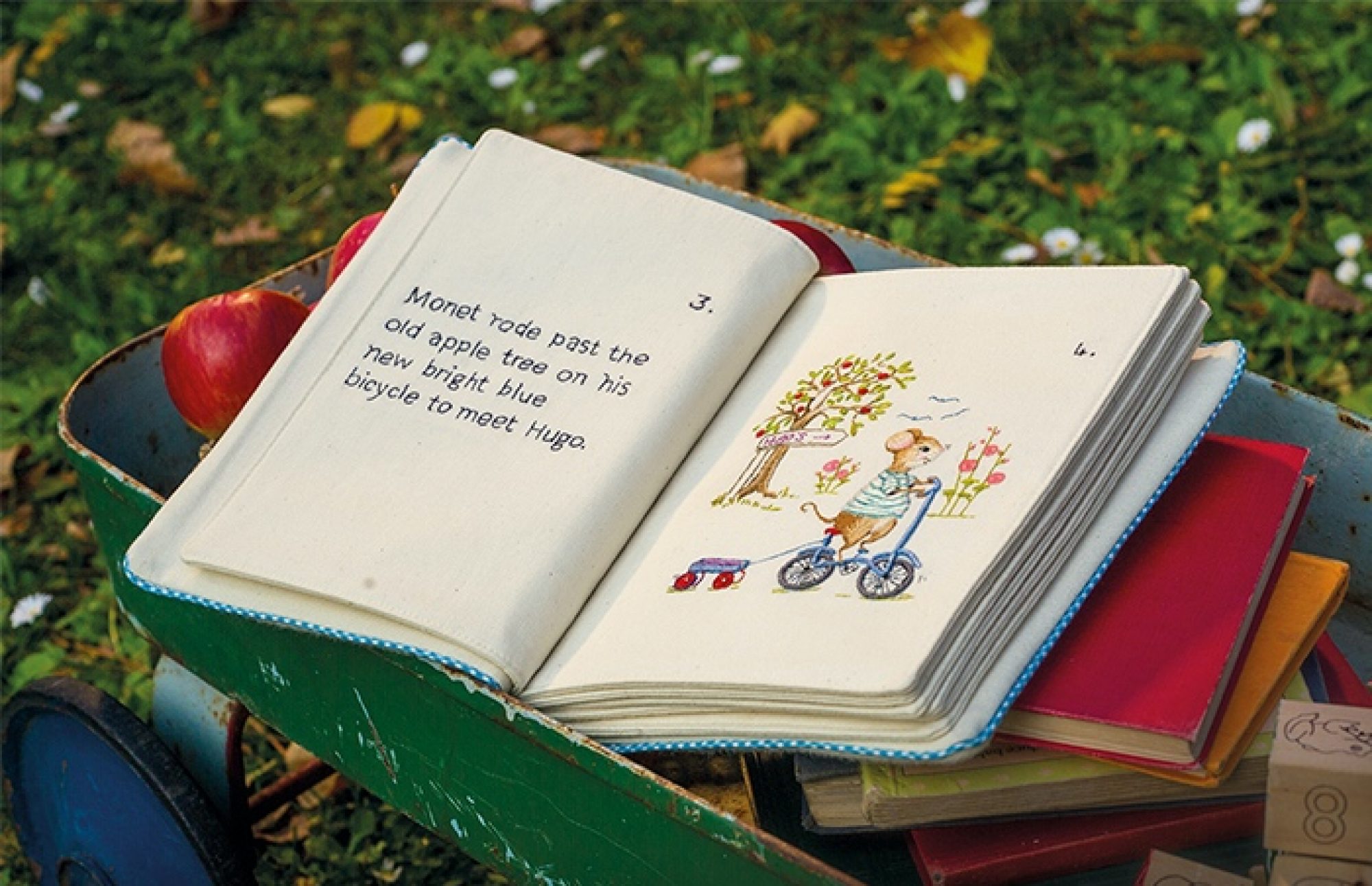 ‘If you wish to design yourself – as I say to everyone that comes to my classes NEVER worry about making a mistake sometimes if it takes several tries to get where you want to go – just remember my little mouse climbing over the day calendar!’ 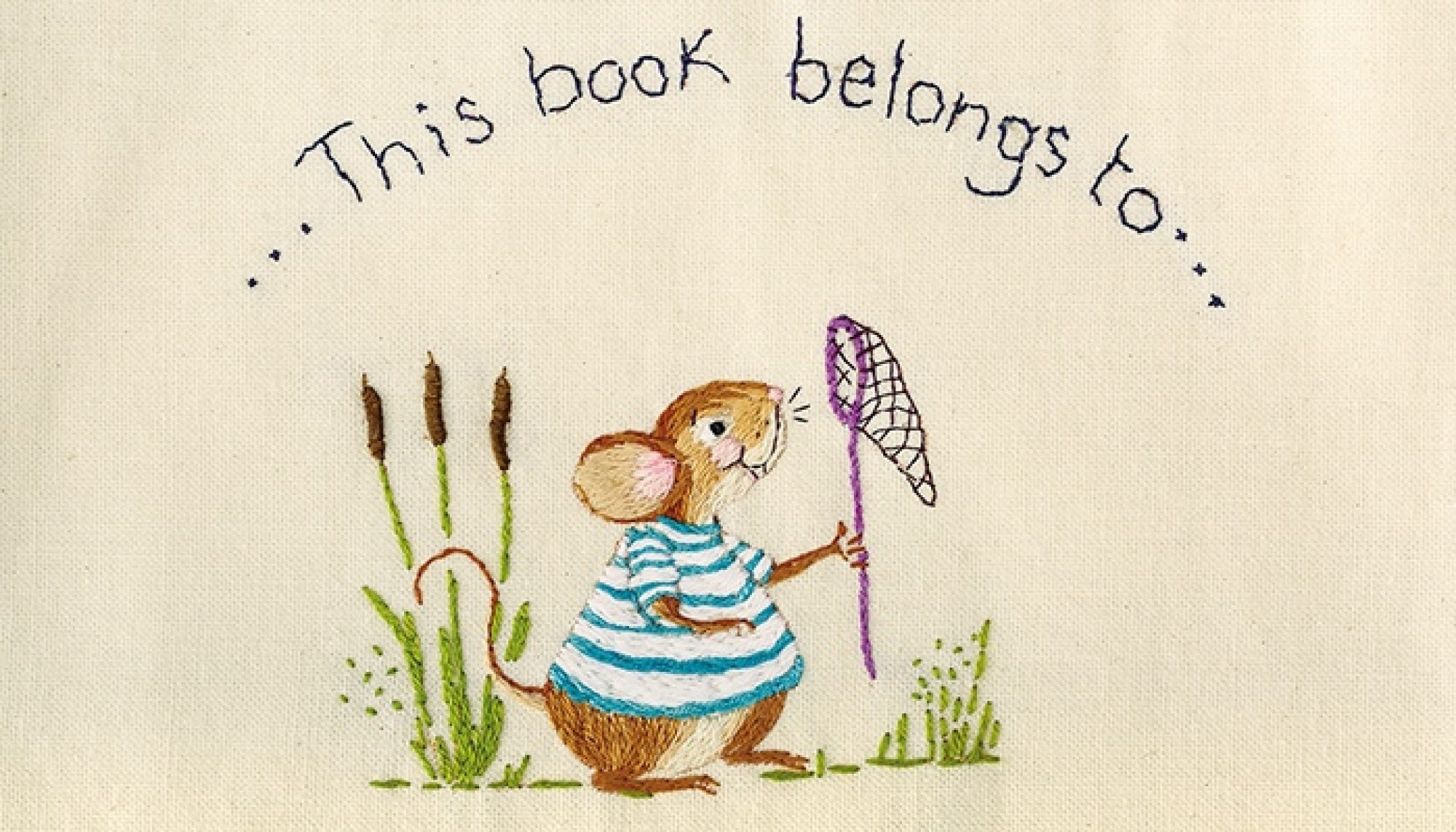 Jenny, on behalf of the international needlework community, thank you so very much for making all our dreams come true and creating a third ‘Adventures of Monet’ book – it’s everything we could have hoped for and more! 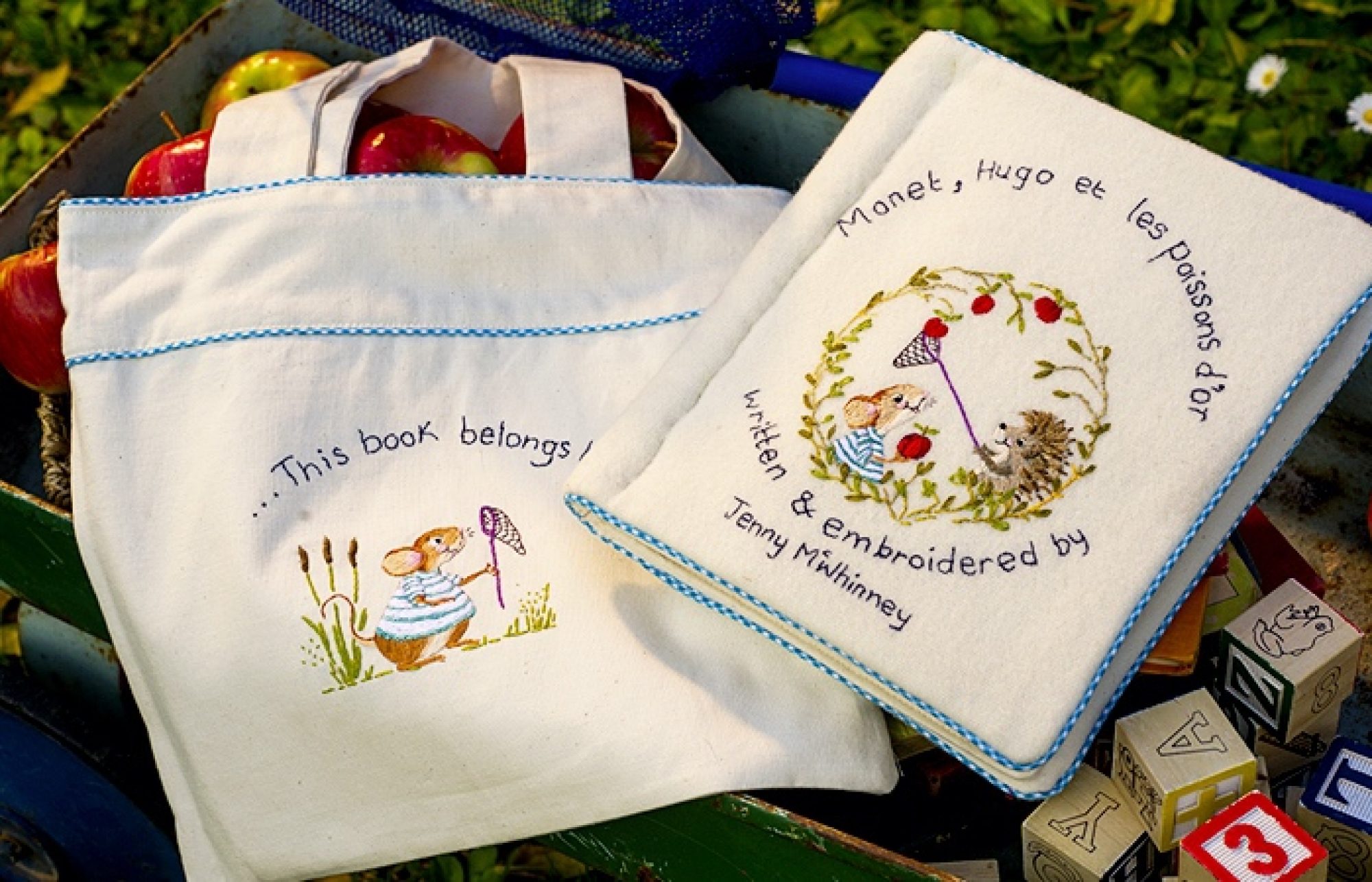 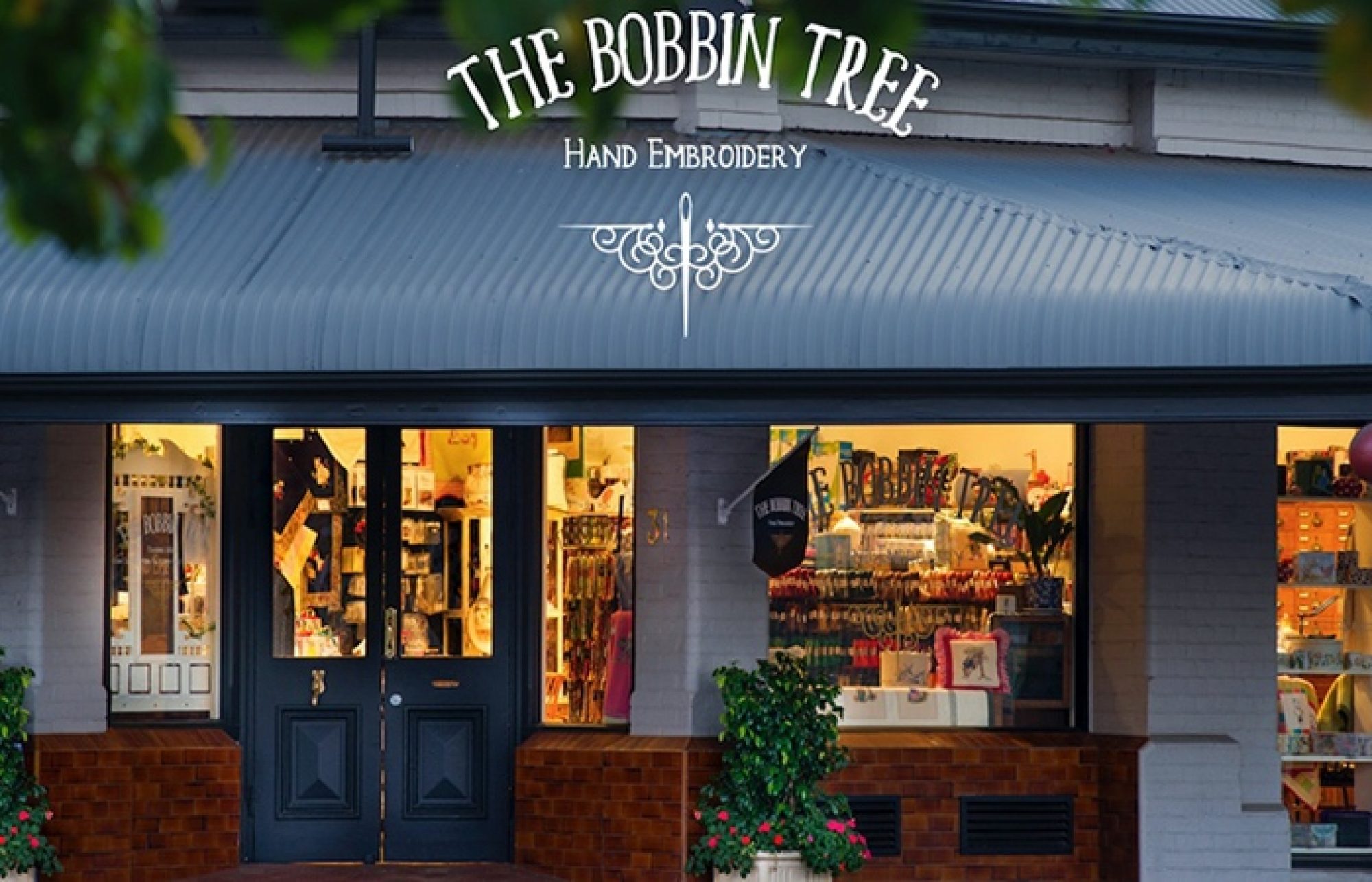 Kits are available direct for from Jenny McWhinney’s store The Bobbin Tree via her website HERE.