It’s not ‘Just for Grannies’

In All Stitched Up! we’ve featured several articles about men who have bucked the stereotypes typically put upon them by taking up embroidery. But men aren’t just forging ahead with needle and thread. Knitting is yet another handicraft which they’re embracing in large numbers, and by doing so, are helping to redefine some common (and erroneous) beliefs about this age-old craft.

How many pictures, cartoons, books and stories include the character of an elderly woman who is inevitably holding a pair of knitting needles? In most of these tropes, she appears to be knitting a nebulous, scarf-like square without any apparent pattern or purpose.

Unfortunately, this stereotype is strong in our culture but, like many stereotypes, it simply doesn’t play out in reality.

Stephen West is one man who bristles when he hears comments about ‘knitting being something that grannies do’. The tall ex-dancer took up knitting early on, even while he was pursuing his dance career in the US and Europe.

He’d knit every spare moment he could between shows and rehearsals, creating fantastic, colourful garments which he either gave away as gifts or proudly wore himself.

Eventually, Stephen reached a cross-road and either dancing or knitting had to go. He hung up his dance shoes and chose knitting. In no time, his career as a designer, teacher and iconic male knitter took off.

He’s now published a multitude of books and puts himself out as an example that knitting is a non-gendered pursuit.

Fortunately, West is not an outlier. Many men are discovering the benefit of knitting, not just from a creative point of view but also for meditative and community value. 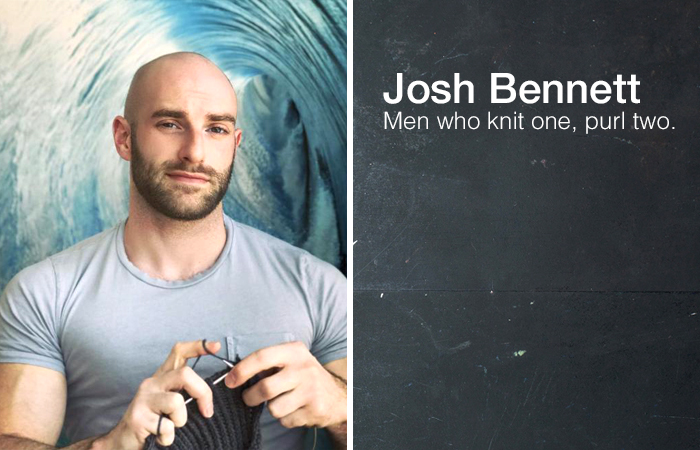 As more ‘knit-in-public’ events are set up around the world, men are finding the courage to join in. Instagram has helped, with West and other knitters like Josh Bennett proudly posting photographs of themselves with yarn and needles. Their following is huge.

Of course, it isn’t always easy to take the leap into a craft which has for so long been associated with women – often elderly women too. Koushi Radhakrisna, a Danish knitter who now presents the TV show ‘The Great Knit Off’ probably wasn’t the first man who went into a yarn shop insisting he was only buying for his mum.

After he overcame his embarrassment, he became addicted to his craft. As well as teaching and designing, he has set up a Facebook group for male knitters only, understanding that sometimes the fear of ridicule will overcome everything, so a supportive space is essential.

In many cases, all it takes is a good, patient teacher or a non-judgemental group to give permission to the man who would like to give knitting a try. Male knitters are everywhere, and their numbers are happily increasing, as are the resources available to them including patterns and online groups.

We can all experience joy in creating something with our hands. Regardless of age, background or gender, that joy is at last becoming universal, and knitting is leading the way.