Dorset buttons… you’ve either never heard of them, or you’re addicted to them, there doesn’t seem to be much middle ground! 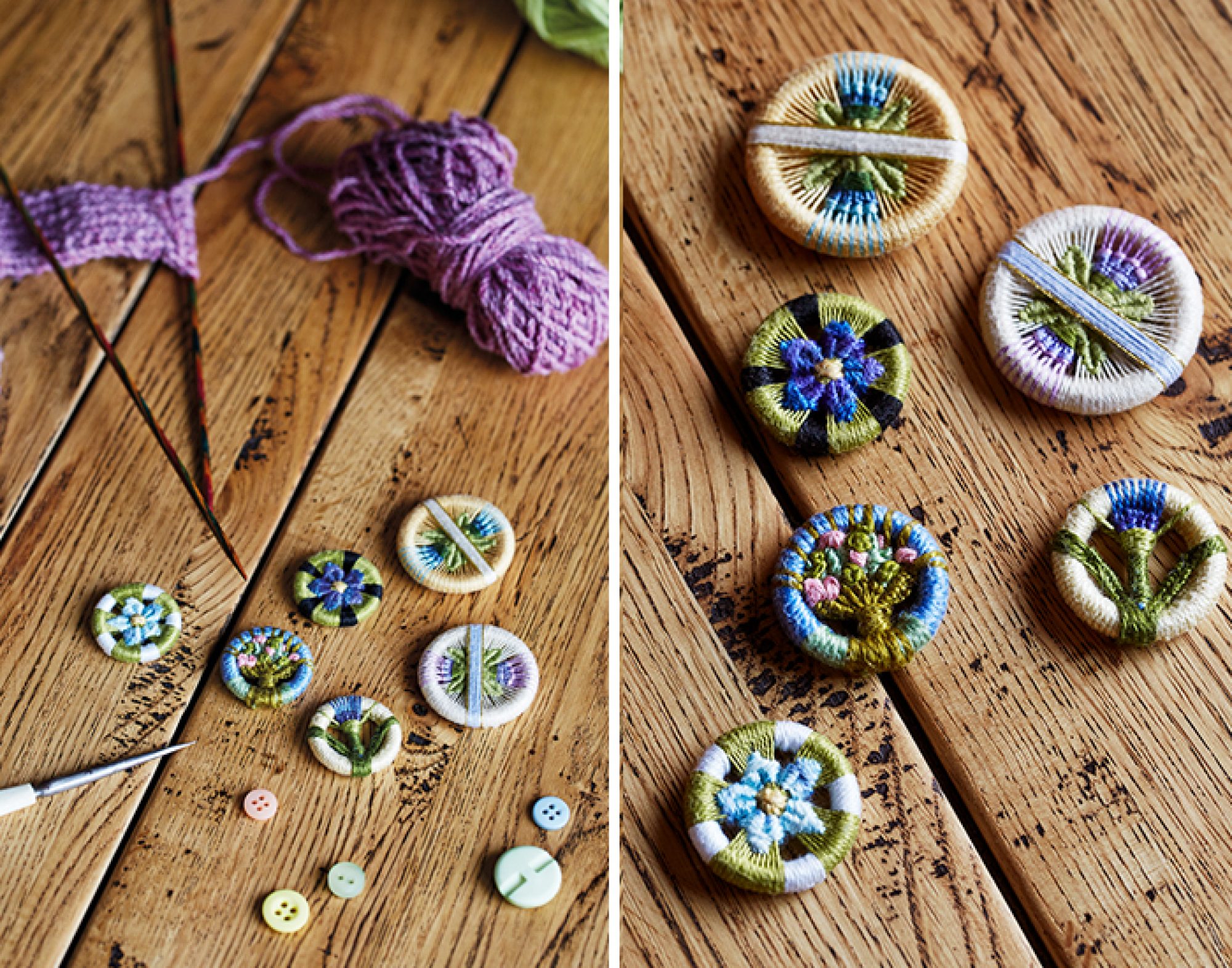 This week we welcome Pat Olski to the Inspirations family with her debut project ‘Fine Tradition’, a collection of totally adorable and totally addictive Dorset buttons.

Never heard of them…

Let’s start with those of us who have never heard of Dorset buttons. They were actually developed in the early 1600’s (so where have you been?) in a place named Dorset, a county in the southwest of England. They became such a phenomenon they were a mainstay of the British economy for hundreds of years and by the end of the 1700’s more than 4,000 people called themselves buttoners. 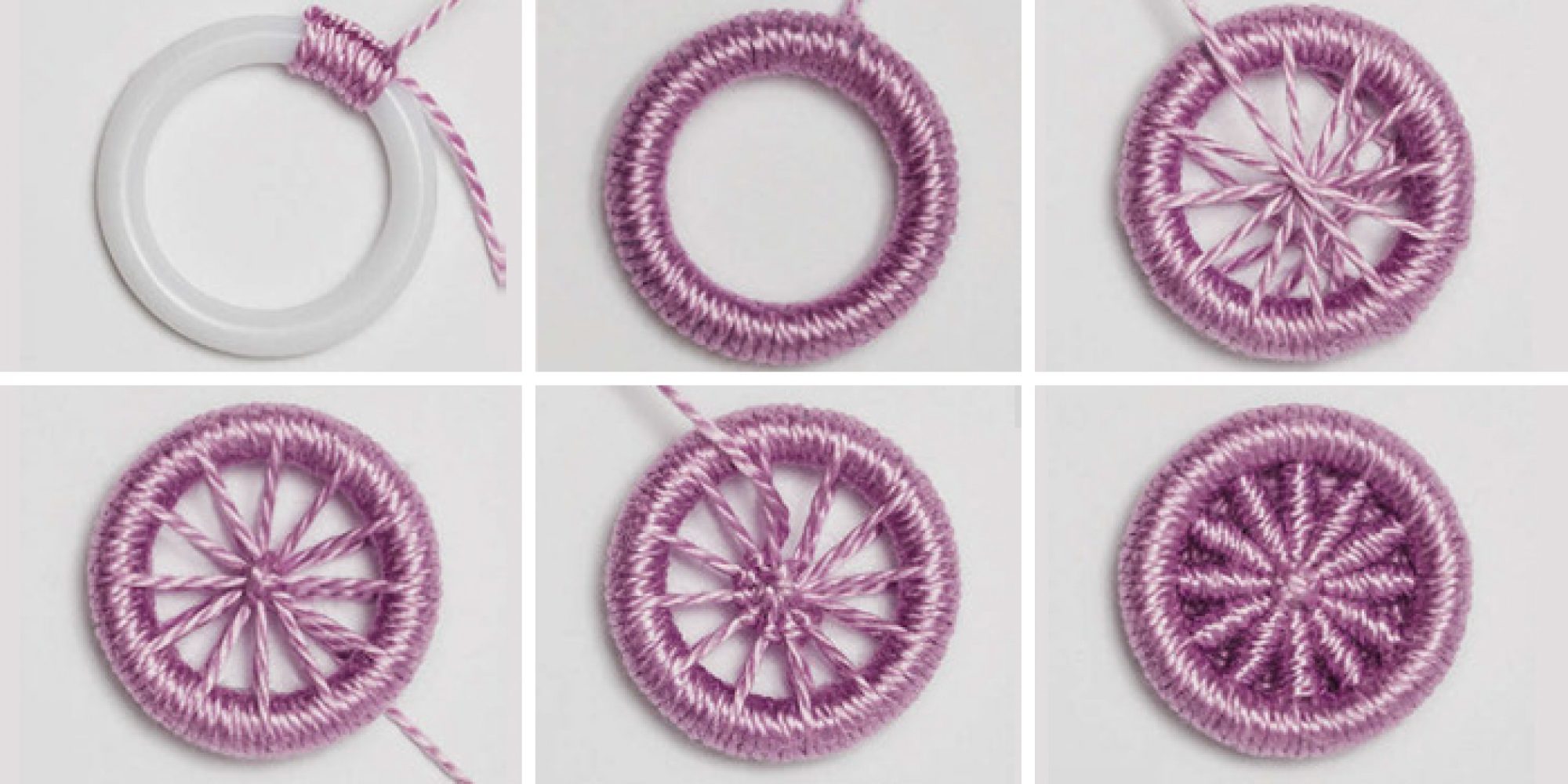 Here is an excerpt from an article Pat has written to help explain a little more about Dorset buttons:

‘The buttons were originally created from linen wound over rings made from ram’s horns, and then later, linen wound over brass rings. They became staples for dressmaking because they could withstand the harsh laundering techniques of the time.

The simple white buttons were used on undergarments, and shirtwaists, while the fancier and more vibrant versions seem to have been made for men’s waistcoats, where they could be shown to their greatest advantage.

Dorset buttons were made in England and exported all over the world, even as far as Australia. Among the textile treasures in the Maas Museum collection in Sydney, Australia is an extraordinary white dress circa 1838, which features exquisite white work, cutwork, and floral embroidery.’ 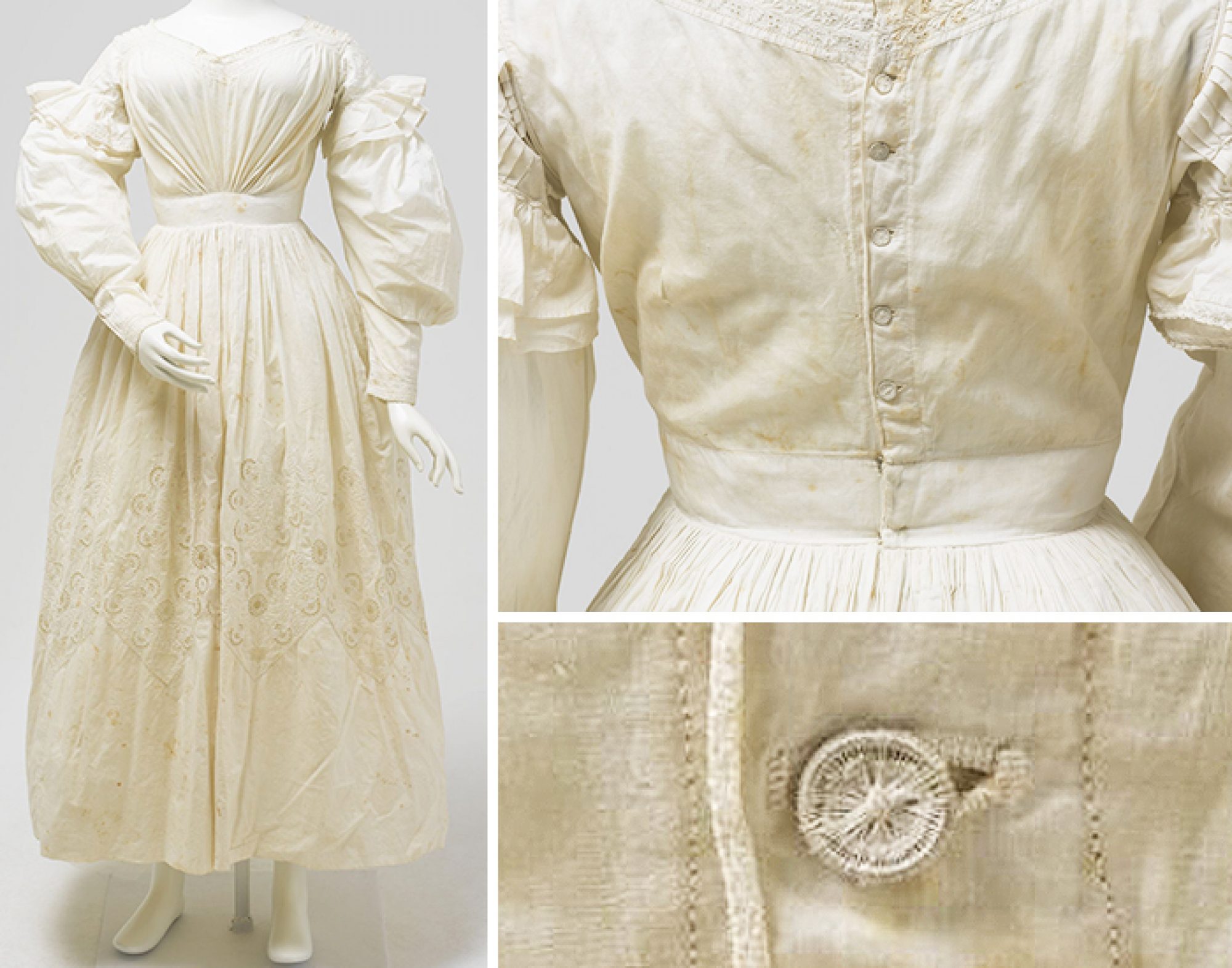 ‘Finishing touches on the garment include piping and beautiful examples of thread wrapped Blandford cross wheel Dorset buttons. The details on the dress give insight to some of the needlework intricacies worn by Australia’s early 1800’s elite.’ 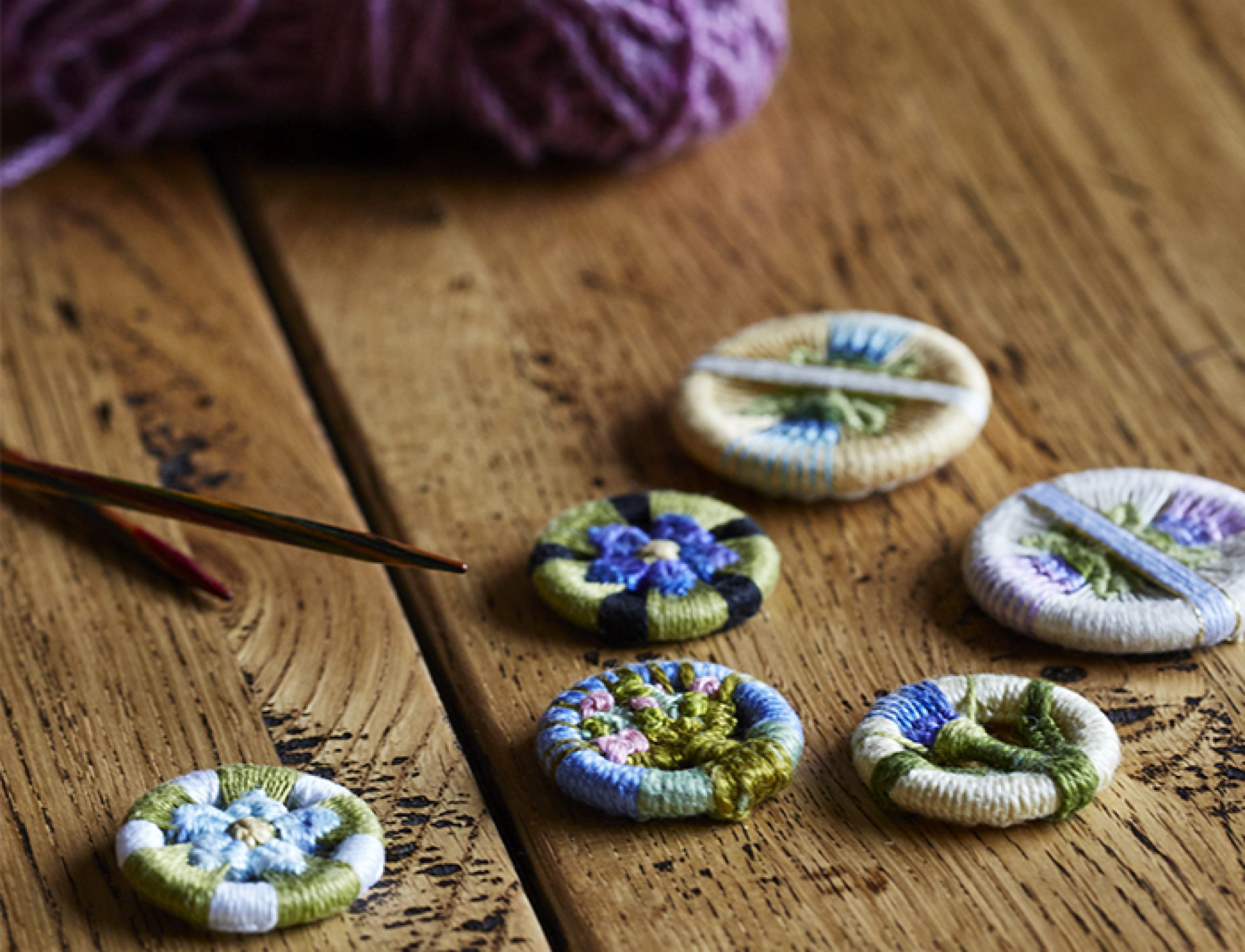 For her project ‘Fine Tradition’ in issue #99 Pat has created a wonderful mix of different Dorset button designs and sizes. The larger size is perfect for use as a brooch with a diameter of 3.8cm (1 ½”) and features a thistle design in two colourways; gold with blue and cream with violet. 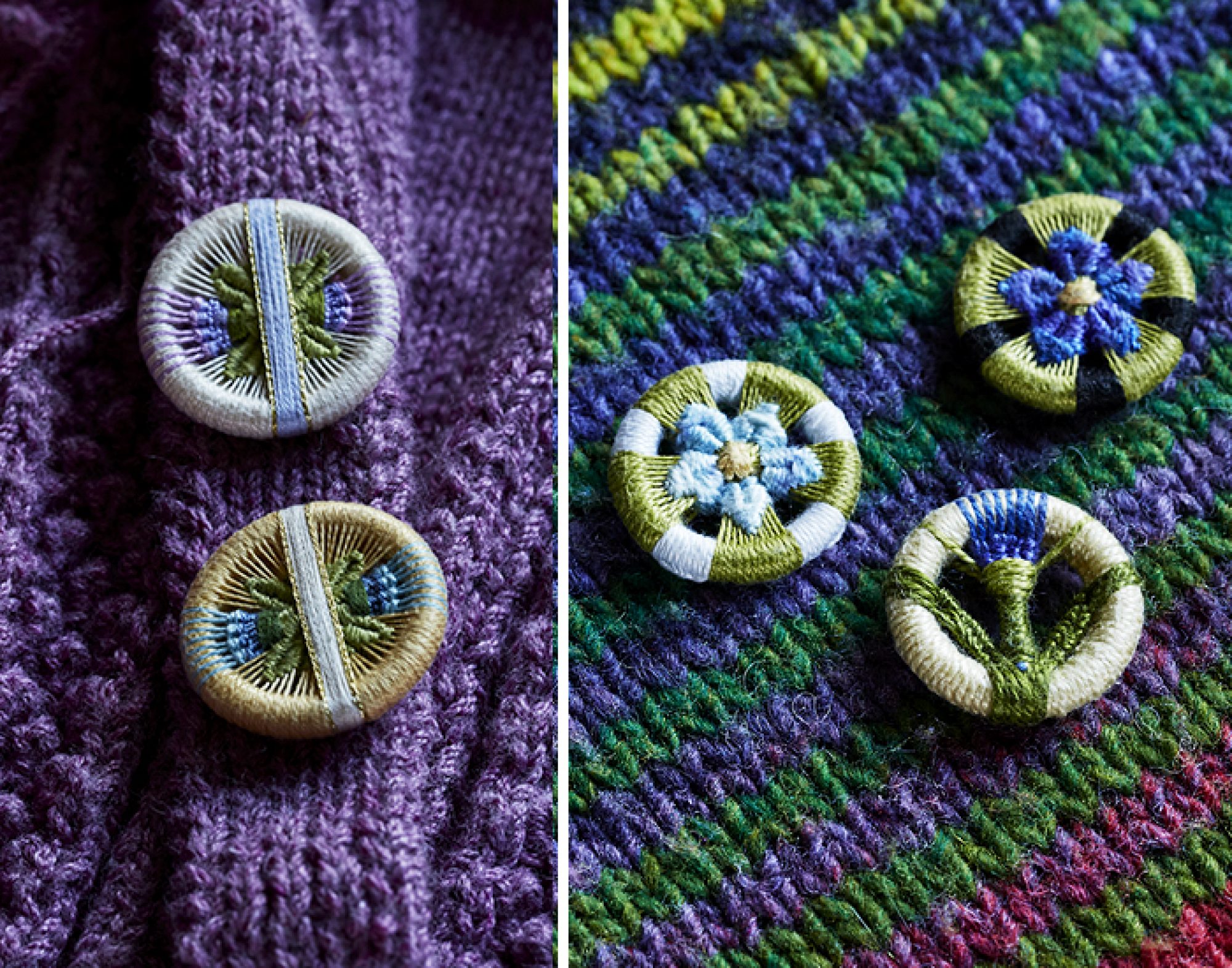 The smaller size is more suited for buttons measuring 3cm (1 1/8”) in diameter with designs including a forget-me-not flower, a rose bush and also a thistle.

Totally addicted to them…

For those of you who are totally addicted to Dorset buttons, it’s ok we get it, they are a lot of fun to make and, just like eating m&m’s or potato chips, you can’t stop at just one!

Dorset buttons are so versatile that while they are often used as the perfect embellishment on a knitted garment, they are also very useful in upholstering and pillow-making, quilting and even adding a finishing touch to a needlework accessory. Other uses include hair accessories, fridge magnets, key rings, greeting card decorations and Christmas tree ornaments. The list is endless. 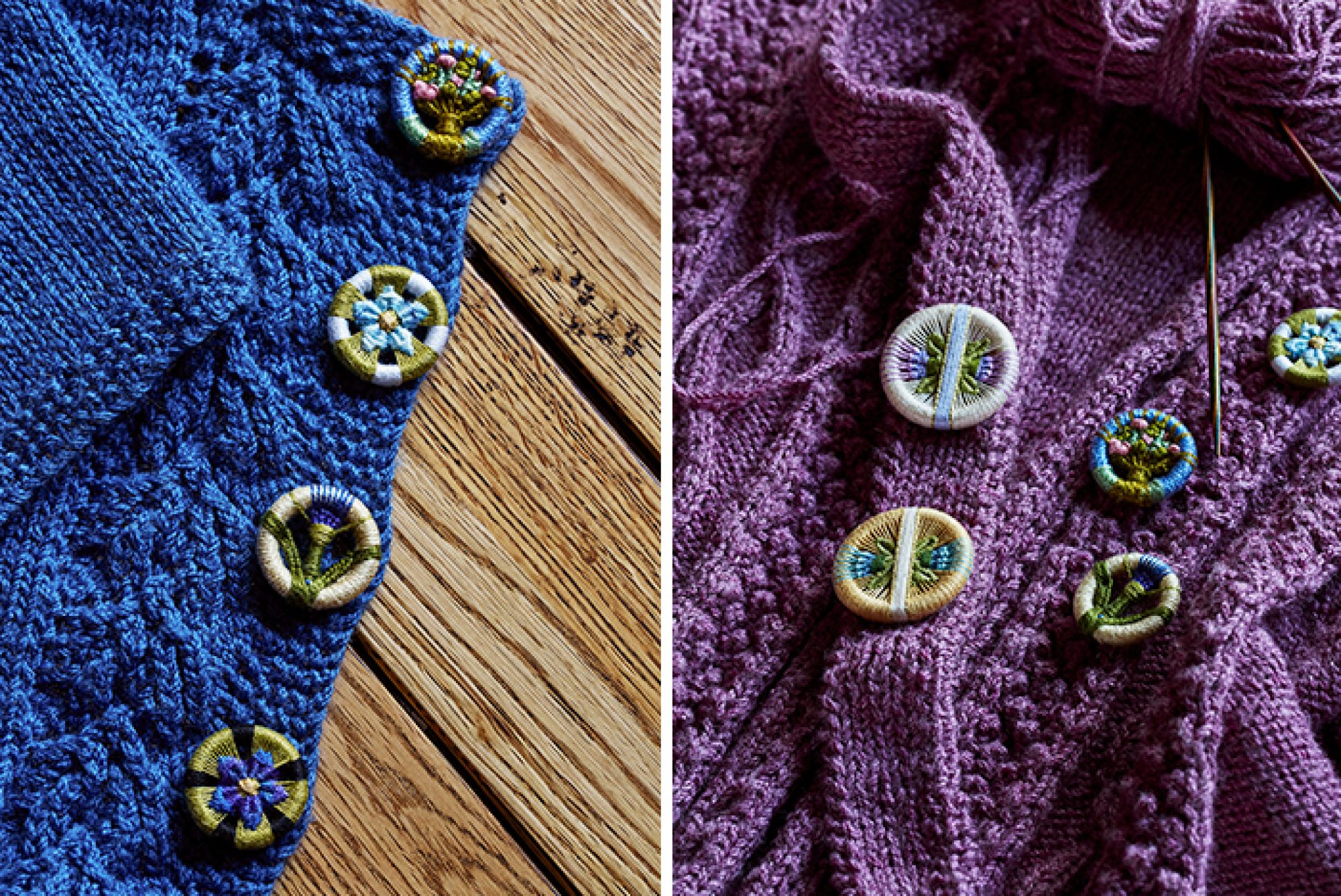 With so much to like about Fine Tradition, it’s no wonder Pat is well known for her ability to take traditional techniques and translate them into relevant and approachable designs that are fun to make, as she explains in her own words:

‘With all of the gorgeous threads at our disposal today, we can create endless variations based on the techniques of the original buttoners. The addition of embroidery stitches is contemporary, but irresistible. A traditional Dorset cartwheel button provides a perfect background for an embroidered spray of flowers and is a lovely way to display your fine handiwork.’

So, there you have it, what’s not to love about Dorset buttons? In fact, to make it even easier to fall in love and share the Dorset addiction with friends and family, you can purchase each of Pat’s five designs as ready-to-stitch kits in packs of six for the buttons and five for the brooches. See below for details.

Carolyn Pearce’s bestselling project ‘Strawberry Fayre’ from Inspirations #95 features a Dorset button on the front as a clasp to keep the necessaire neatly closed. 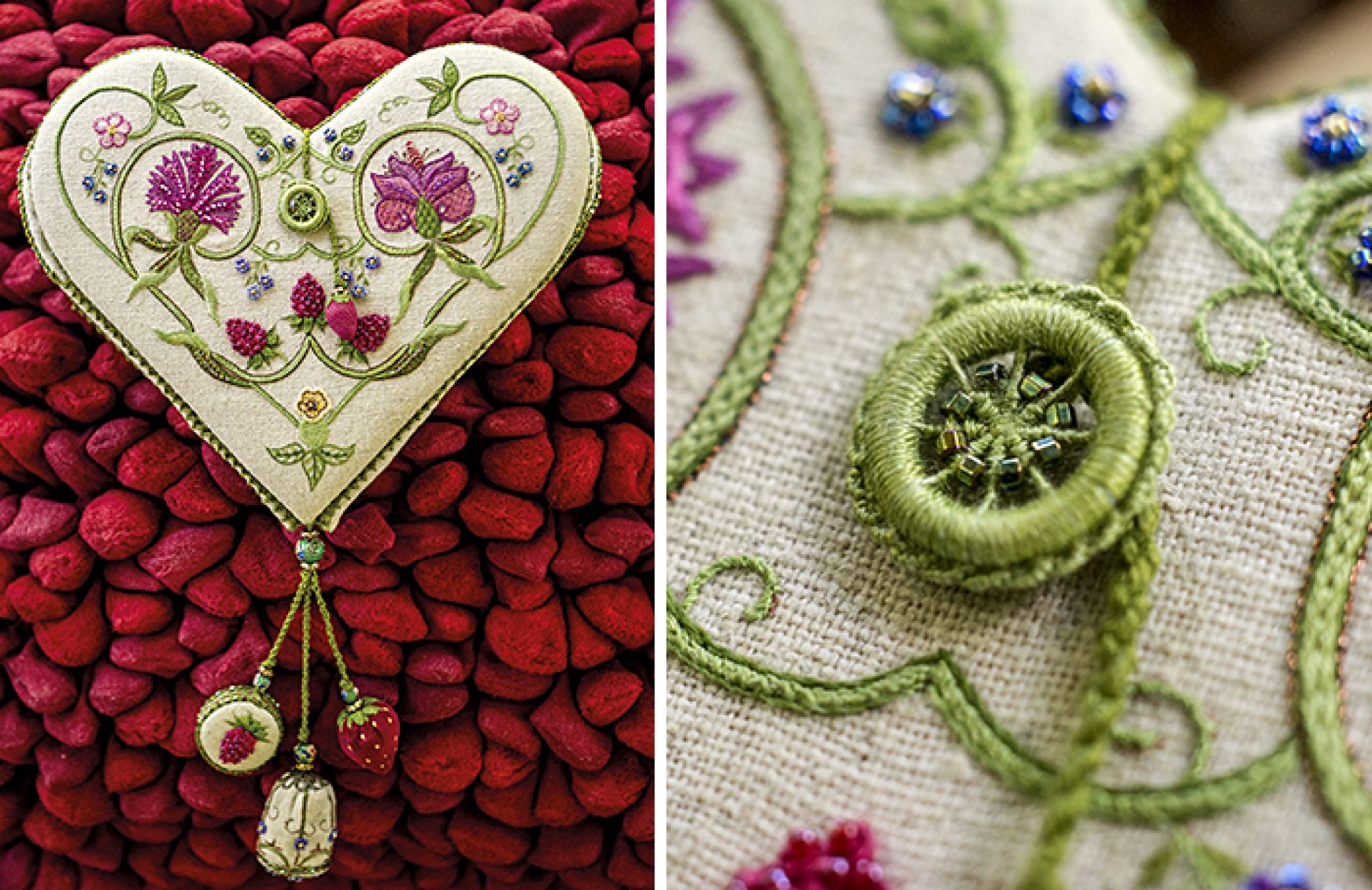 This is a great example of how the practical need for a button can be elevated and become a feature by creating a Dorset button that blends perfectly with this highly ornate project.

If you would like to read more about the History of the Dorset button, check out the Henry’s Buttons website HERE.

For more information about Pat Olski, visit her website Yarn Whirled HERE to see more of her fabulous creations, find out where she is teaching and updates on her new upcoming book ‘Creating Dorset Buttons’.

Make Your Own Fine Tradition

These pretty floral designs, worked in a contemporary twist on Dorset buttons, display inventive wrapping and weaving to create stylised flowers or a base on which further embroidery can be worked.