Regardless of all the creative developments in modern embroidery, there will always be a deep love and lasting popularity for traditional techniques and styles. One of the most popular traditional styles of all time is Hardanger embroidery from Norway. 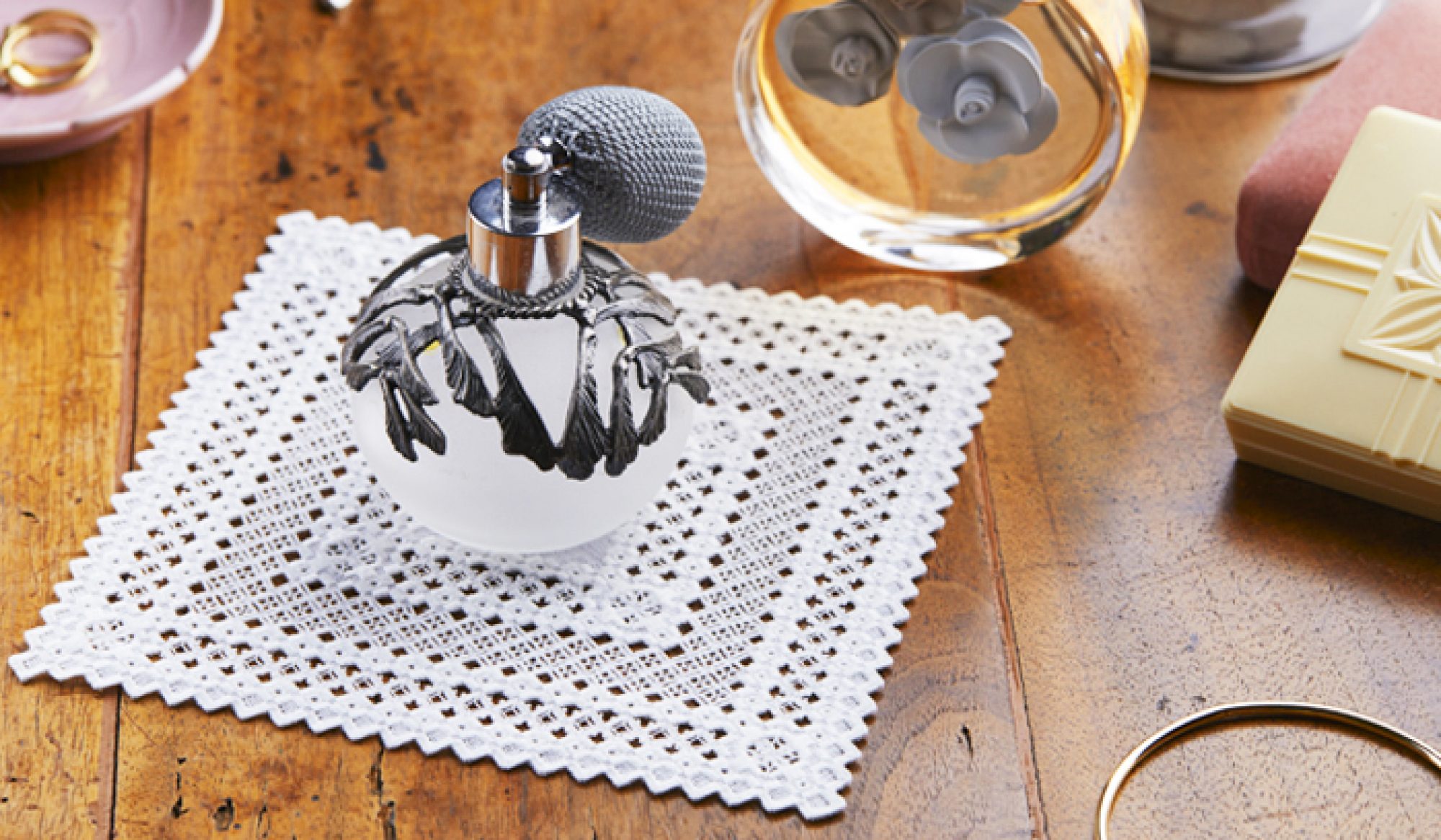 Hardanger has a long and fascinating history and is a fabulous demonstration of how styles of embroidery were shared, developed and then adopted into specific cultures across Europe.

Hardanger-style embroidery, based on the basic shapes of squares and diamonds, was believed to have come from Ancient Persia. Thanks to the increase of trade through Byzantium, by the Renaissance period embroidery employing the drawn thread techniques characteristic of Hardanger was flourishing across Italy and other parts of Europe. 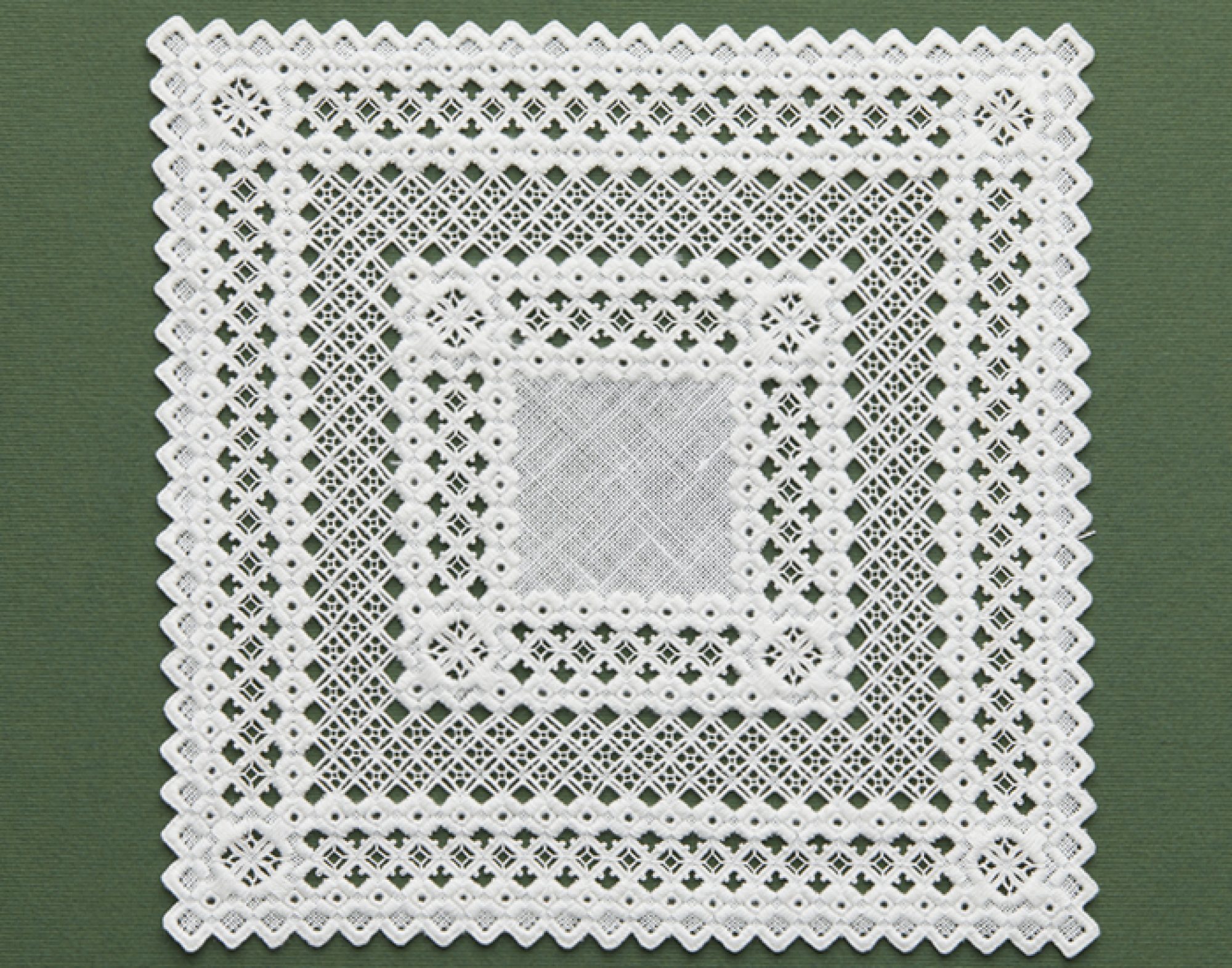 In Italy, the style developed into the intricate patterns of reticella and the Punto Aria patterns of Venetian Lace. Coupled with motifs such as the star from India as well as Assyrian and Egyptian patterns and shapes, the trend spread northward.

Soon, Norwegian drawn thread work, as well as Danish and Dutch Hedebo were being practiced, with the embroidery we now know as Hardanger flourishing in the western part of Norway between 1650 and 1850. 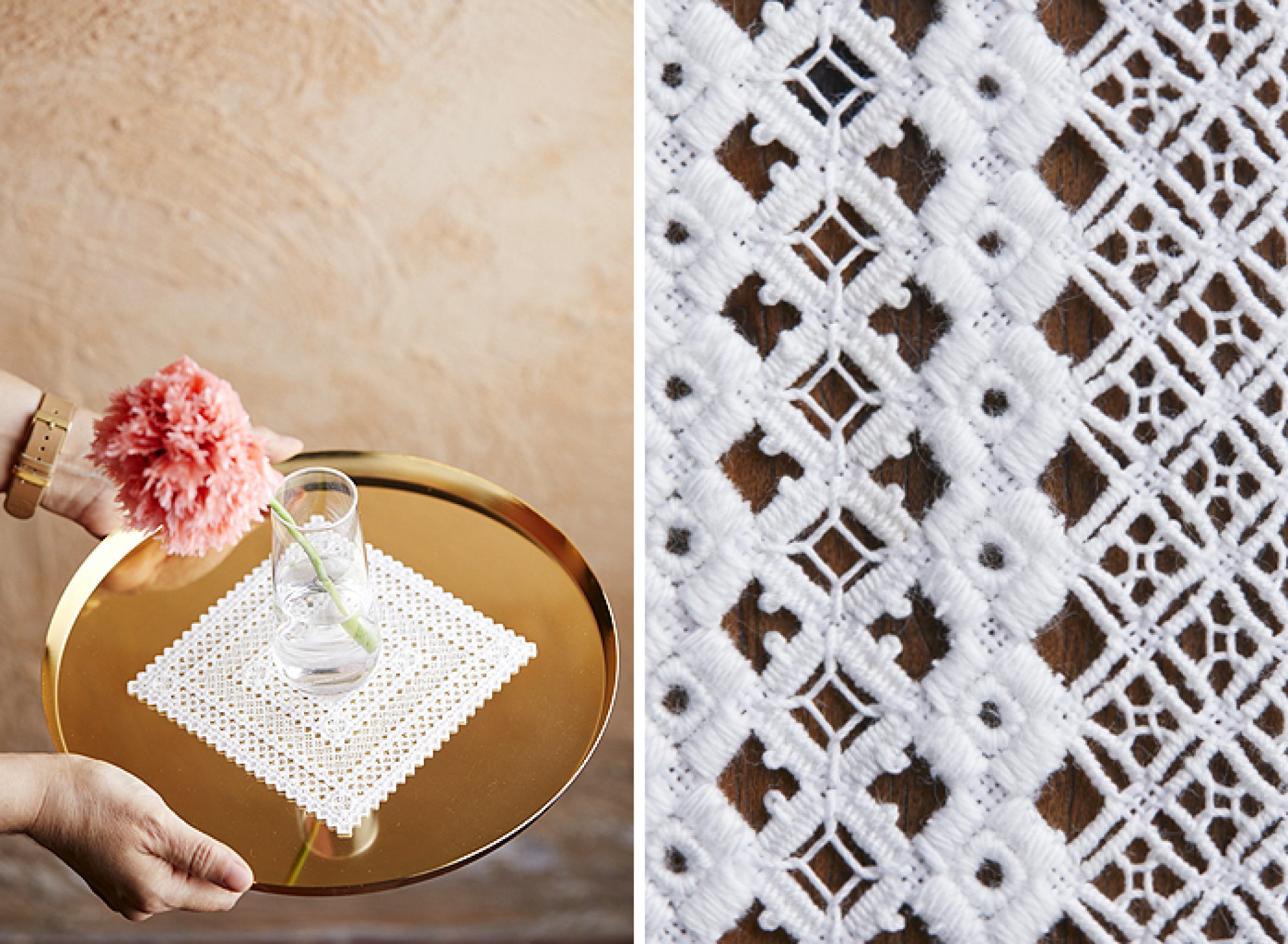 Usually worked in natural colours such as white or cream, it was not unusual for those intrepid Norwegian stitchers to create exquisite works on linens of 50ct or more.

In a nod to these incredibly talented forbears, Di Kirchner has designed the piece ‘Delicate Stitches’ featured in Inspirations issue #106, which is an exquisite Hardanger mat so lacy that you wonder how it holds together.

Using 38ct linen and employing a range of traditional Hardanger stitches, Di has created a wonderful project which will challenge the beginner, as well as satisfy and delight the expert.

The airiness of ‘Delicate Stitches’ is achieved through alternating bands of picots and dove’s eyes within lines of  Kloster blocks and wrapped bars. This variation means that wherever the eye lands, it is captivated by the many different textures and amazed by the level of minute detail. 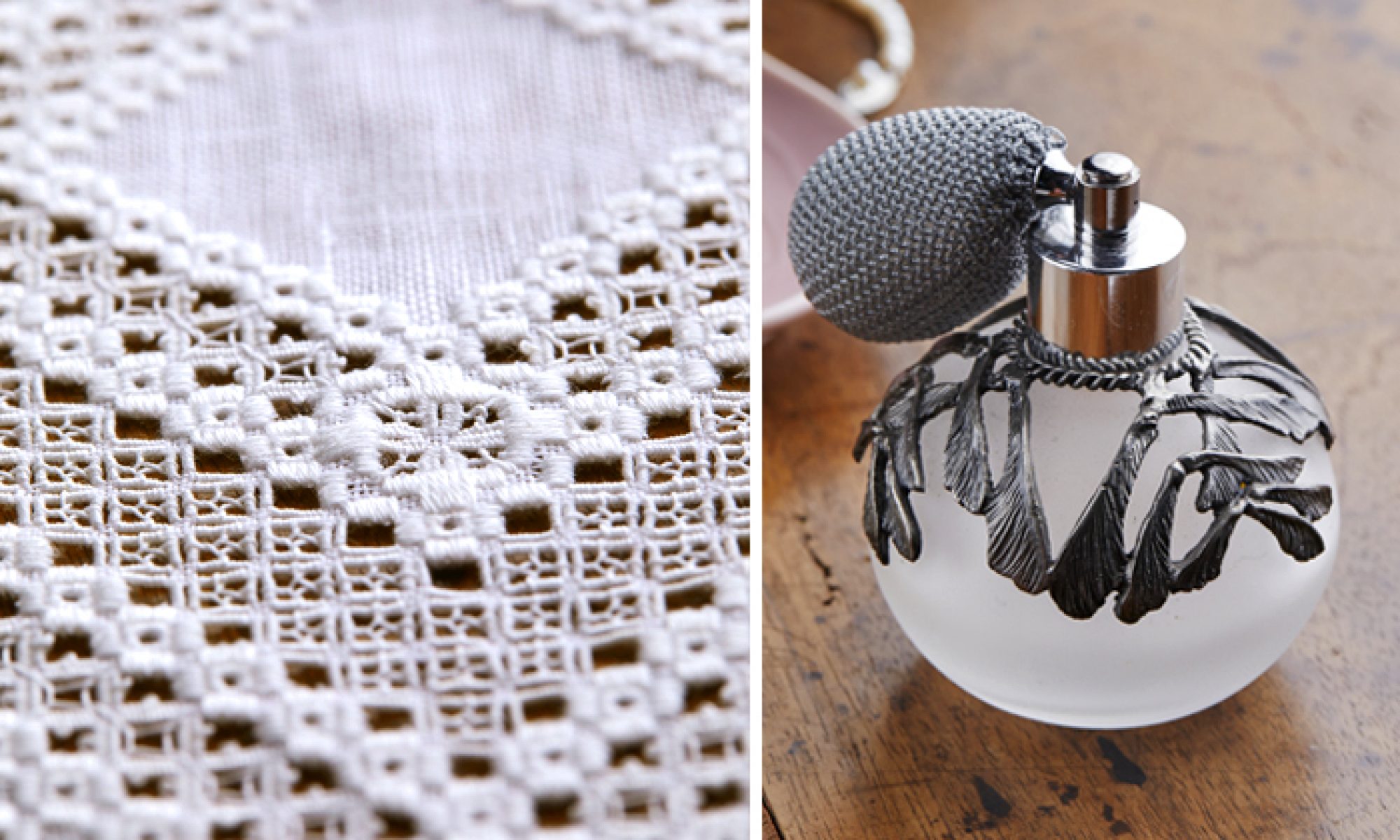 It is difficult to believe that this cobweb-fine mat has a linen structure, so cleverly have the voids been cut and filled. But Di has expertly achieved precisely what traditional Hardanger set out to do – create something which appears ethereal, but has all the strength needed to last.

To successfully complete ‘Delicate Stitches’, it important to work the stitches in the order specified. Kloster blocks need to be worked in a specific way to hold the linen threads and the surface details should be worked before cutting.

Cutting is best left until you have good light, fine, sharp scissors and you’re not too tired as many an embroiderer has experienced that sinking feeling you get the instant after you’ve cut the wrong thread.

Some may disagree, but neither a cheeky glass of wine, nor a grumpy mood are conducive to cutting Hardanger threads successfully!

Nevertheless, the wonderful meditative quality of this technique and the exquisite results make it all worthwhile. 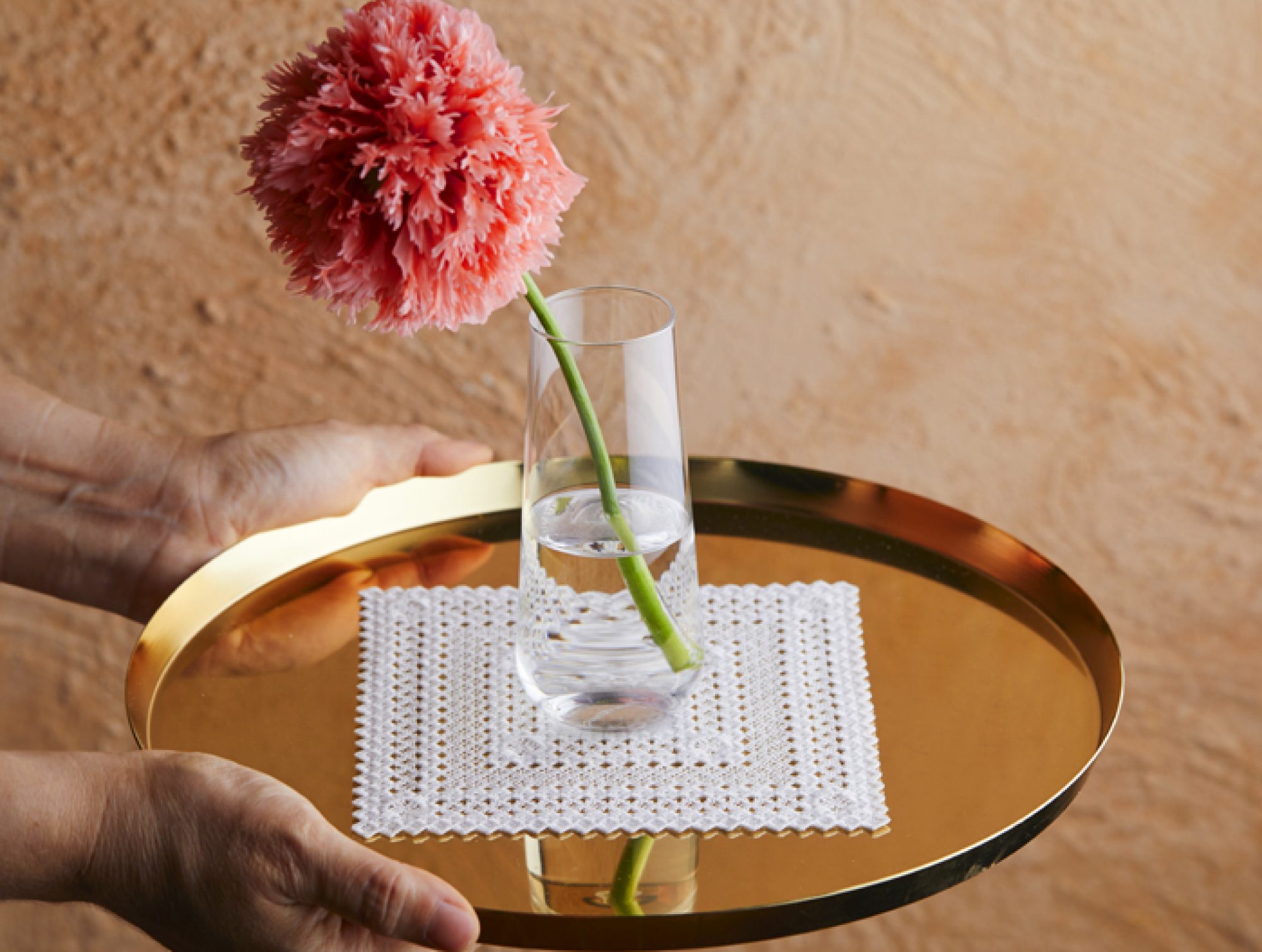 You will very quickly understand why this style of embroidery swept across Europe during the middle ages and Renaissance. And you’ll also learn why it is so popular still today. Sometimes, traditional is best and ‘Delicate Stitches’ is the perfect demonstration of that.

Make Your Own Delicate Stitches 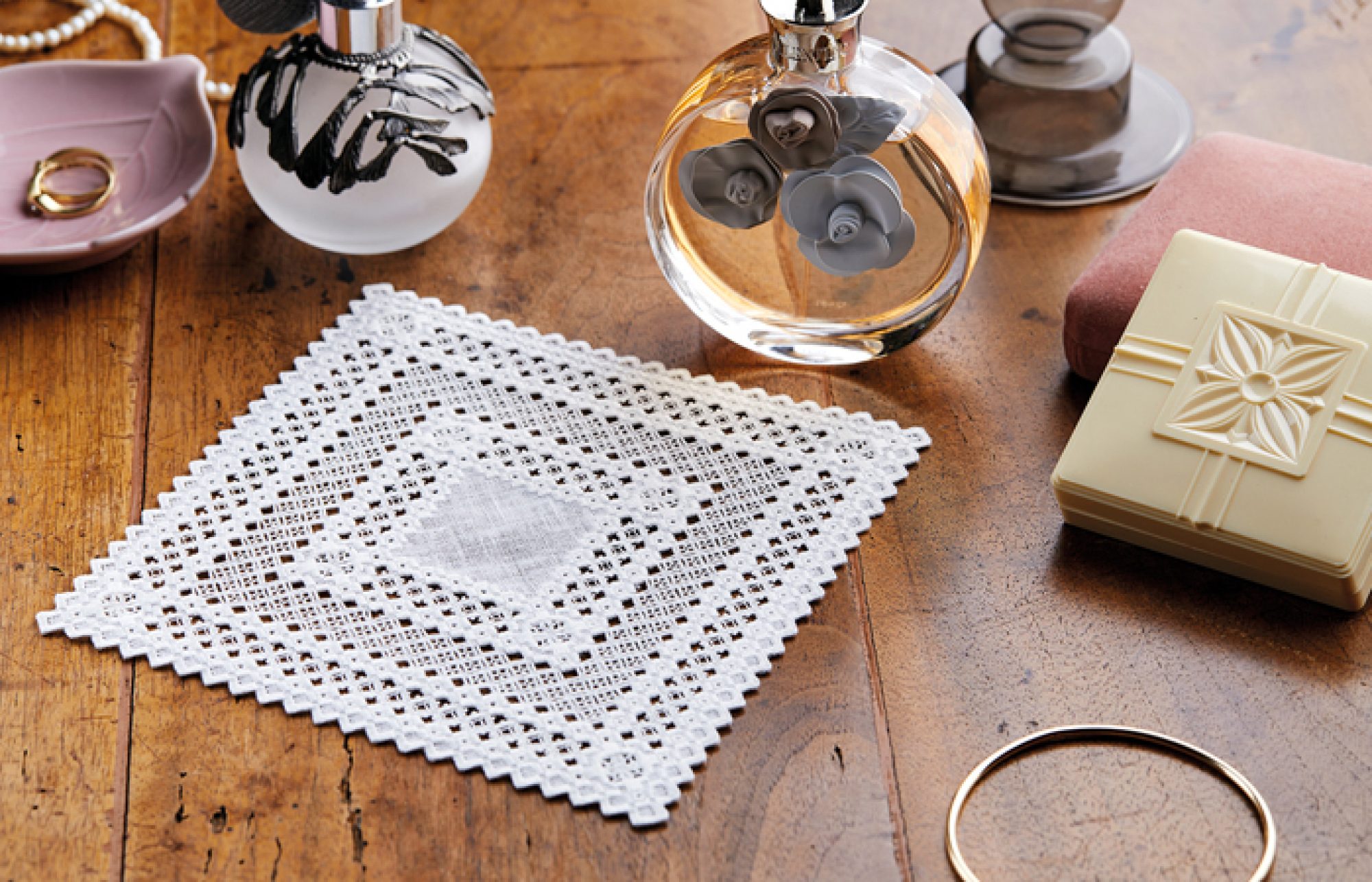 The Inspirations Ready-To-Stitch kit for Delicate Stitches includes everything* you need to re-create this dainty mat: Fabric (unprinted), embroidery threads and needles.