We all know Dasher and Dancer and Prancer and Vixen. But do you remember Ready and Steady or Racer and Pacer? How about Donder and Blixem? In fact, Santa’s reindeers have a varied and fascinating history before they were even introduced to Rudolph and sent up into the snowy sky to deliver gifts to children all around the world. 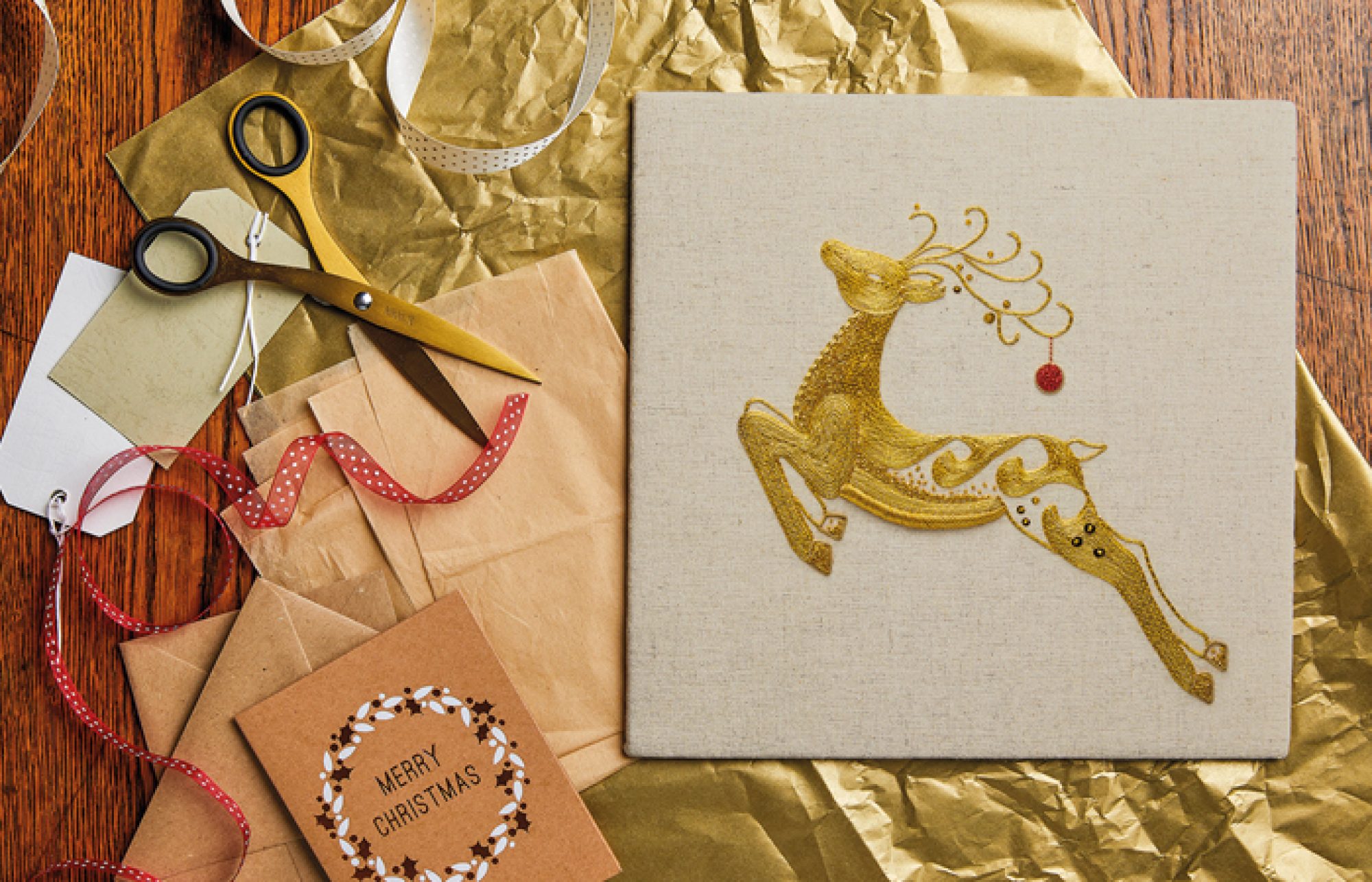 The origins of Santa’s eight reindeer come from Clement Clarke Moore’s famous poem, ‘A Visit from St. Nicolas’ which we know more commonly as ‘’Twas the night before Christmas’. Written in 1823, the poem was the first written reference to the reindeer, with Donner and Blitzen at that point being called Donder and Blixem.

Prior to that poem, the first inkling that we had that Santa employed reindeer to pull his sleigh was from a slightly earlier, anonymous illustrated poem from 1821 entitled ‘Old Santeclause With Much Delight’. One of the pictures accompanying this verse showed a sprightly reindeer hooked up to Santa’s sleigh. 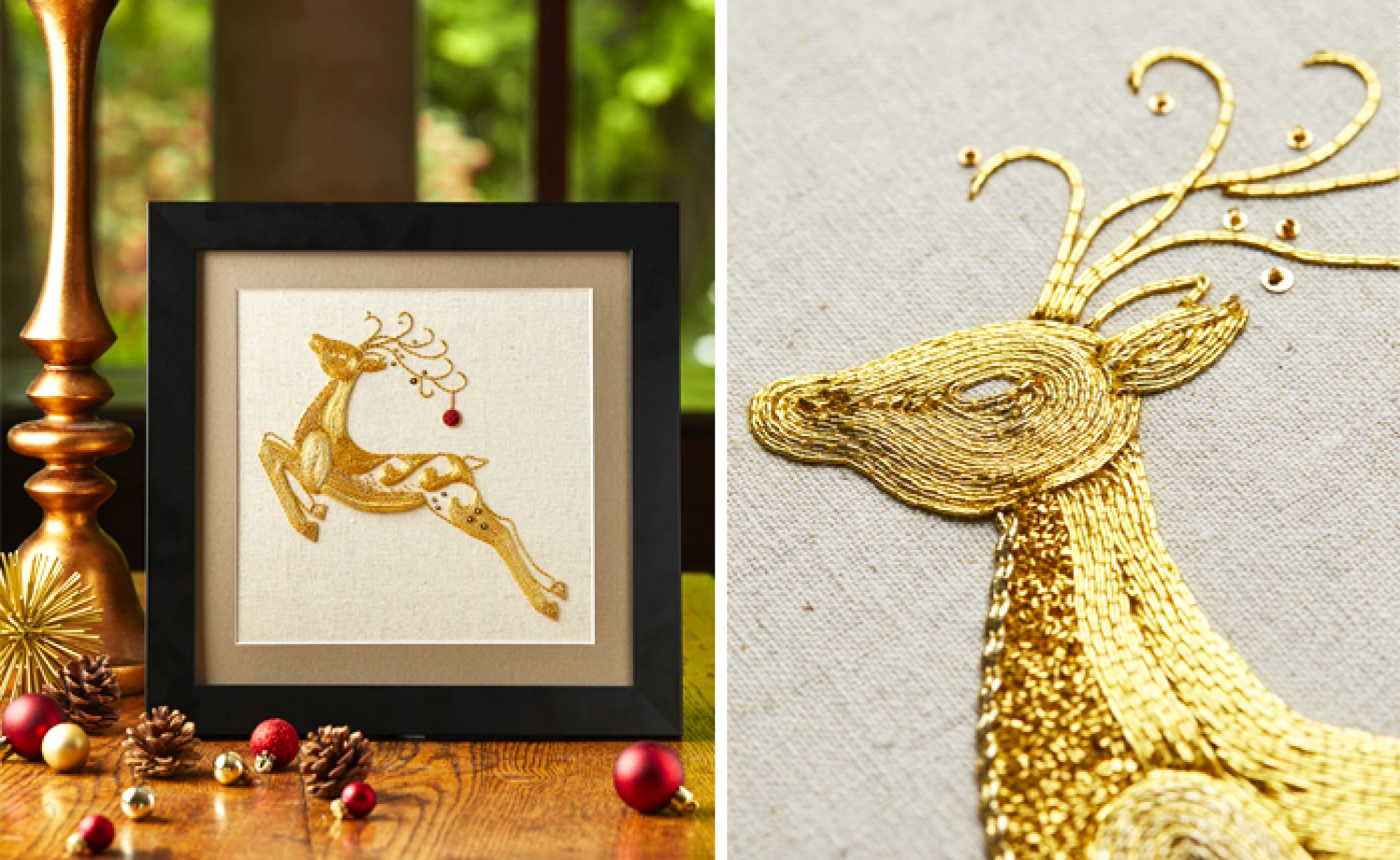 So, where did Rudolph come in? It seems he was a much later addition to the original group, having first been introduced in 1939 and finally cementing his place as leader of the pack through the popularity of the famous song, ‘Rudolph the Red Nosed Reindeer’, released 10 years later. 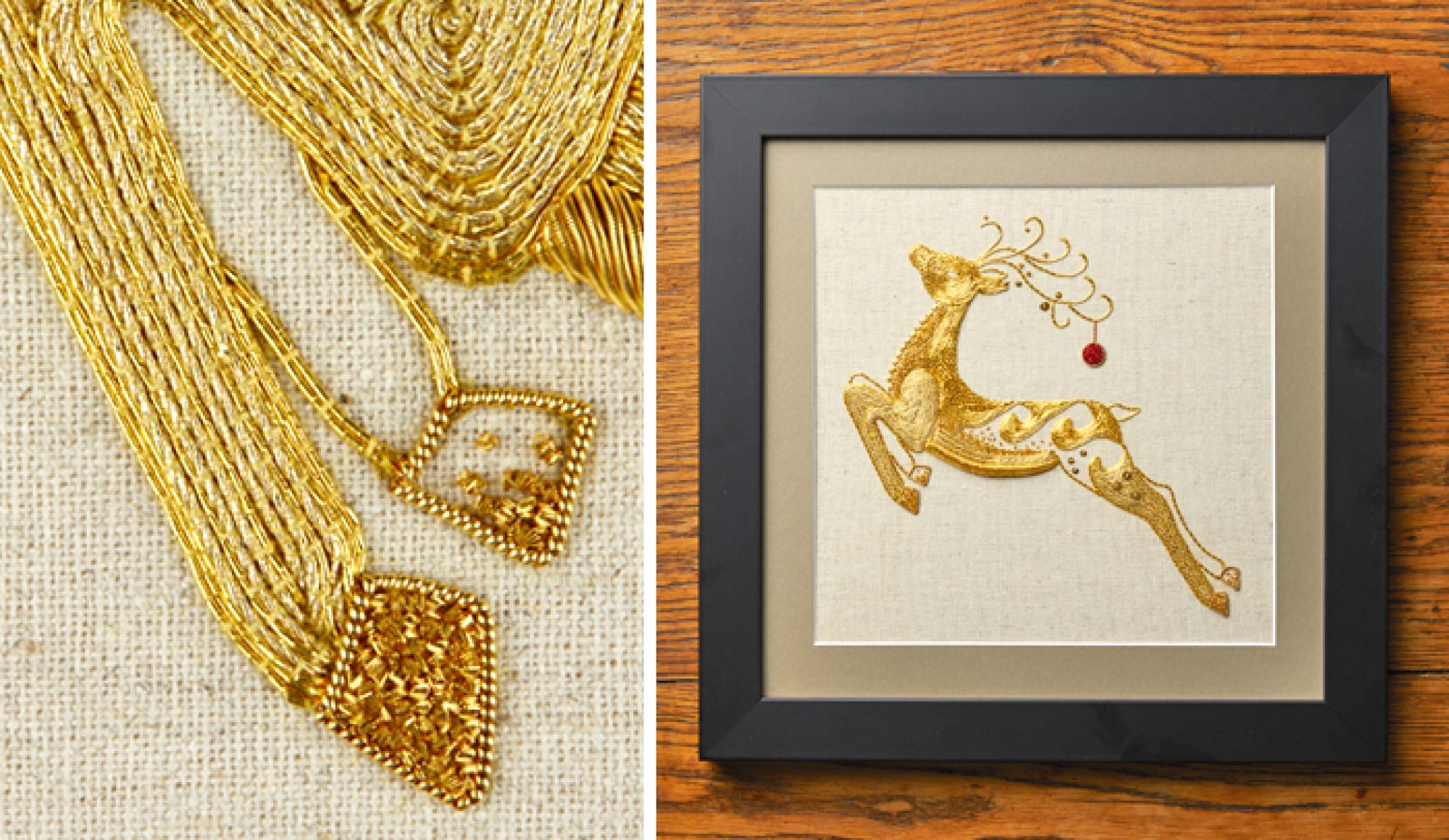 If it hadn’t been for Clement Clarke Moore, there is a good chance that we’d be looking out of the window on Christmas Eve hoping to spot Ready and Steady, Fearless and Peerless. Frank L. Baum of Wizard of Oz fame actually wrote a story in 1902 entitled ‘The Life and Adventures of Santa Claus’ where he listed ten reindeer, none of which we would recognise today. Flossie and Glossie were Santa’s original pair, but they are soon joined by their rhyming companions, including the sadly forgotten Feckless and Speckless! 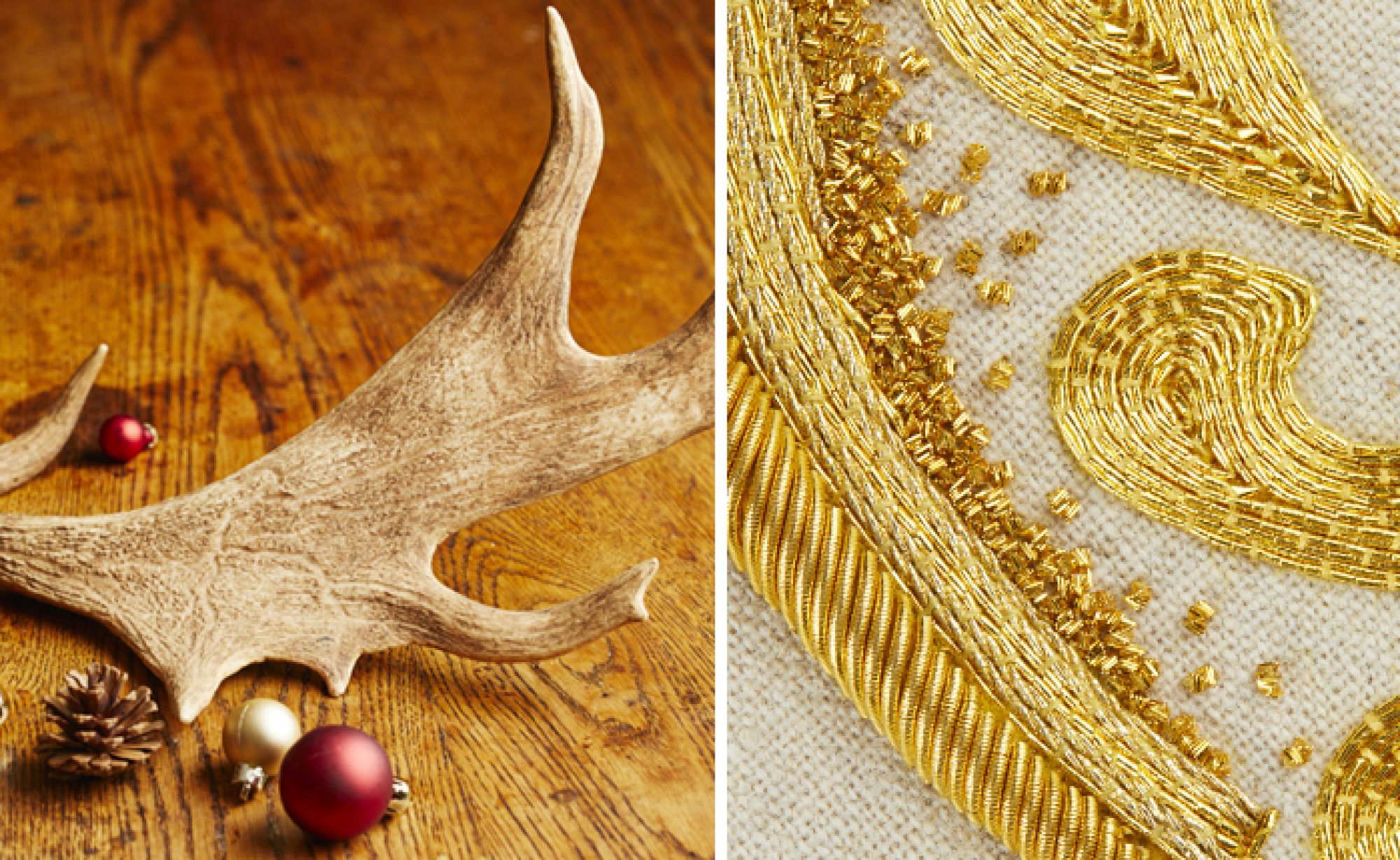 But the path of history is a strange one and the result is that we all know and love Clement Clarke Moore’s team with the addition of the red-nosed misfit.

And first in that team is Dasher, the subject of Karen Newbrook’s magnificent goldwork project from Inspirations issue #108.

Karen, a student from the Royal School of Needlework in London, is making her Inspirations magazine debut with her spectacular reindeer. Exquisitely worked in gold thread, Dasher is guaranteed to become a favourite.

Leaping gracefully off his natural cotton/linen background, Dasher is formed with a clever combination of couching, chipping and padding. His sinuous lines, complete with swirls, twists and smooth edges provide such an incredible sense of movement you want to grab him before he springs away. 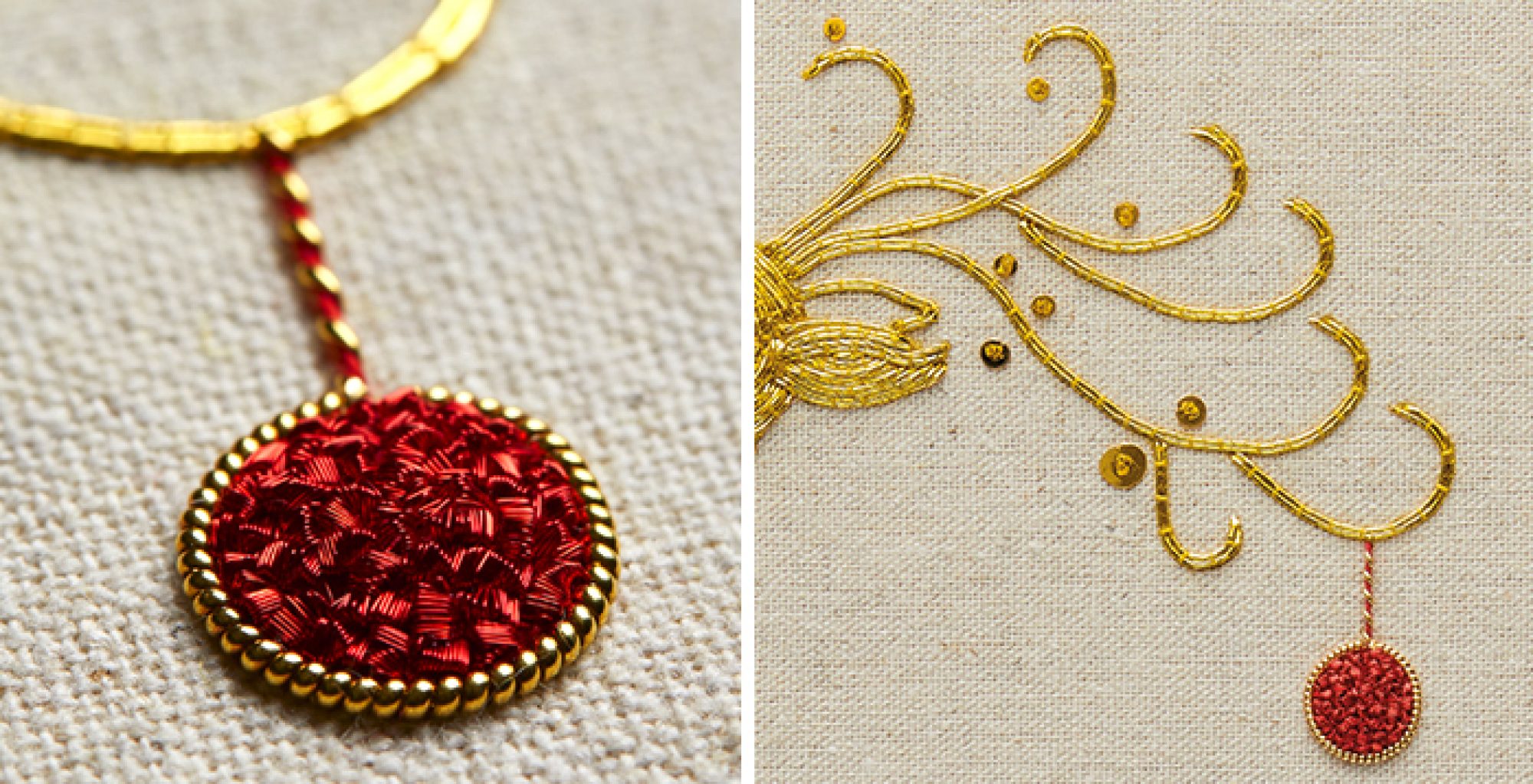 His elegant antlers are highlighted with a perfectly placed splash of colour – a hanging red Christmas bauble, reminding us of Dasher’s important place in Santa’s Christmas retinue. 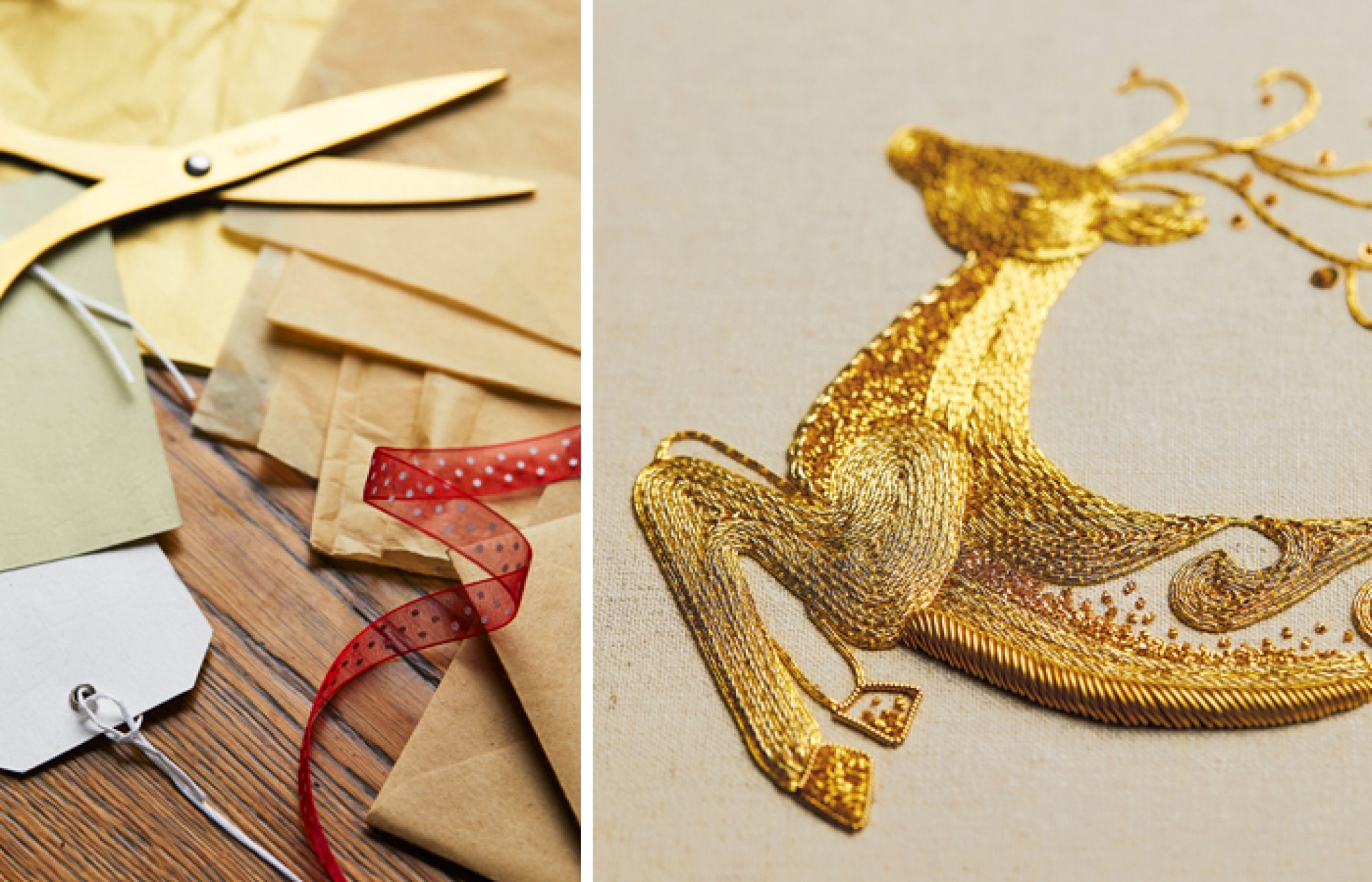 As we have commented before, success in goldwork comes from careful placement and getting the twists and turns of the thread just right. But the time it takes to perfect this elegant reindeer is worth it.

You’ll enjoy seeing Dasher slowly emerge from beneath your needle, full of life and energy, his head thrown back joyously as he welcomes the Christmas spirit.

If there is one project you are going to complete before Christmas arrives this year… or maybe next, it should be Dasher. You won’t ever tire of seeing him when you bring him out year after year, all ready to remind you of the joy, sparkle and exuberance which characterises this most wonderful time of year.

Make Your Own Dasher 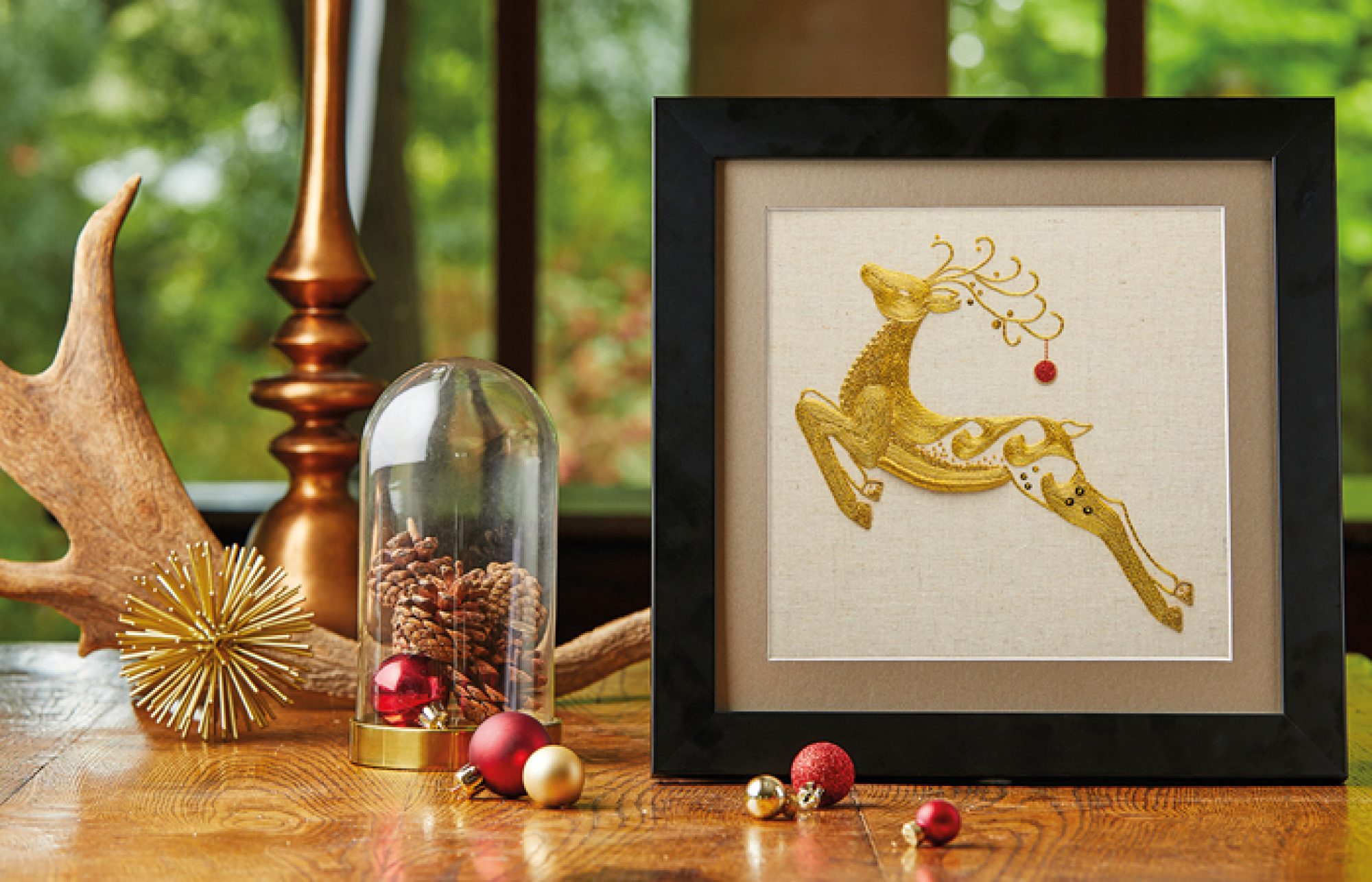 Dasher by Karen Newbrook is a magnificent goldwork reindeer with a festive antler ornament.

Due to popular demand Dasher kits are currently sold out. The good news is that more stock is on its way. The not so good news is that due to sourcing lead times and current delivery delays there is an expected wait of 8-12 weeks. Thank you for your patience.

*Please Note: To cater for flexibility of purchase, instructions are not included with our kits. For step-by-step directions on how to create this project, please refer to the magazine/digital pattern.