The iconic symbolism for Christmas the world over consists of images of snow-covered cottages and cosy, warm hearths, with stockings hanging on a mantle adorned with holly and a tiny robin perched on the windowsill. 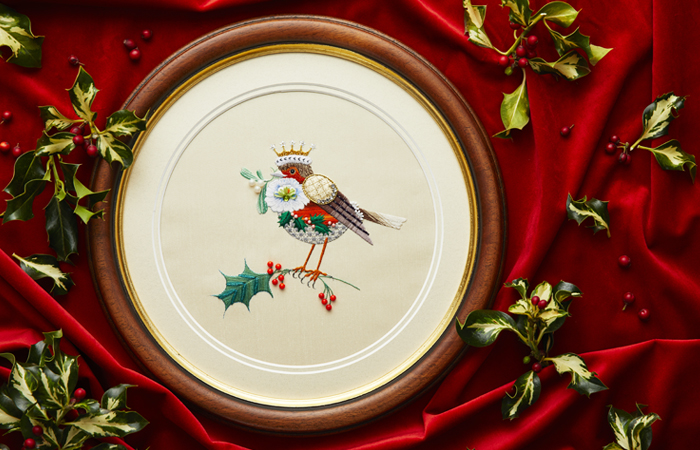 As incongruous as this scene is for many due to the climatic, flora and fauna realities of where we live, Christmas is as much about traditions as anything else and so these types of images firmly remain part of our love of the season. 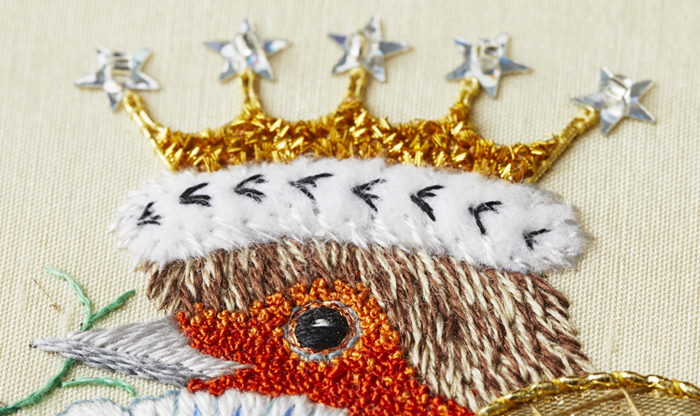 When you consider that it was during the 19th Century when many of our modern Christmas traditions were crystallised, snow was almost guaranteed for most of the Northern Hemisphere. With snow and the winter cold came the need for warm fires and welcoming hearths, but also the ubiquitous presence of that boldest of little birds, the robin. 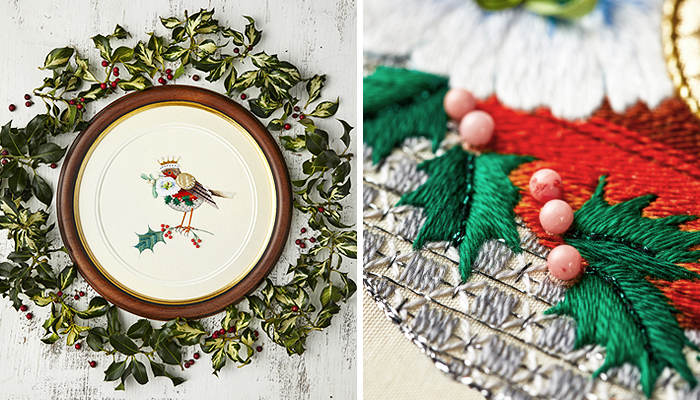 Unlike many other British birds, the robin has always remained throughout the colder months, defying the need to migrate to warmer climates.

As a result, the robin would help to lift spirits by joyfully singing its little heart out during snow-covered mornings and bitterly cold afternoons.

But the robin’s role as a symbol of Christmas did not just come from the fact that they regularly appear in winter gardens. It is believed that the robin’s association with Christmas was something brought about yet again by those sentimental Victorians. 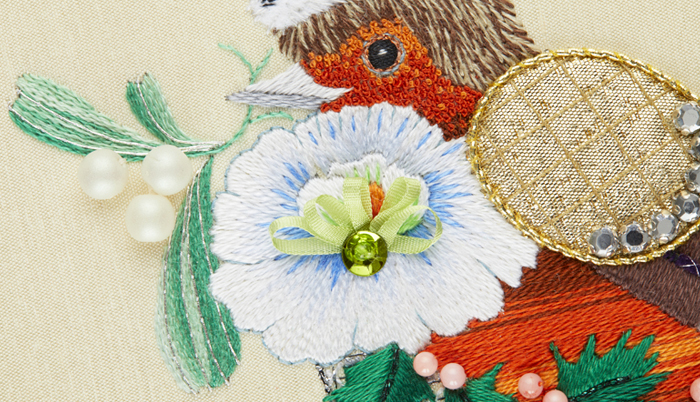 During the 19th Century, the writing and sending of Christmas cards became very popular. People would eagerly await the postman who arrived laden with Christmas cards bringing news and greetings from friends and family near and far. At the time, the Royal Mail postmen wore bright red coats and soon became known as ‘robins’ or ‘redbreasts’.

As Christmas card artists created new designs to meet demand, the image of the postman morphed into an image of the common bird from which he gained his nickname, and the link between the robin and Christmas was forged. 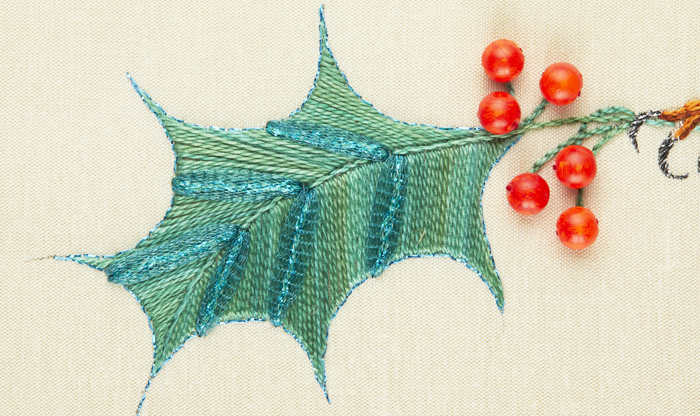 This is why Nicola Jarvis’s project Christmas Robin from Inspirations issue #108 is so clearly an image of Christmas. Everyone will be familiar with Nicola’s love of birds and her incredible ability to design gorgeous, unique and stunning avian projects. It seems perfectly logical that, when it came to Christmas, she’d produce a glorious robin, sporting a golden crown and wing covert with an ostentatious white flower sitting right at the centre of its scarlet breast.

Nicola always delights us with the range of stitches and materials she uses.

Silks, beads, metallic threads, goldwork, pearls and even ribbons and felt are all brought together in perfect harmony to create this magnificent fellow. Any stitcher, whether beginner or advanced, will experience all the joy of experimenting with the variety of stitches, materials and techniques required to complete this project. 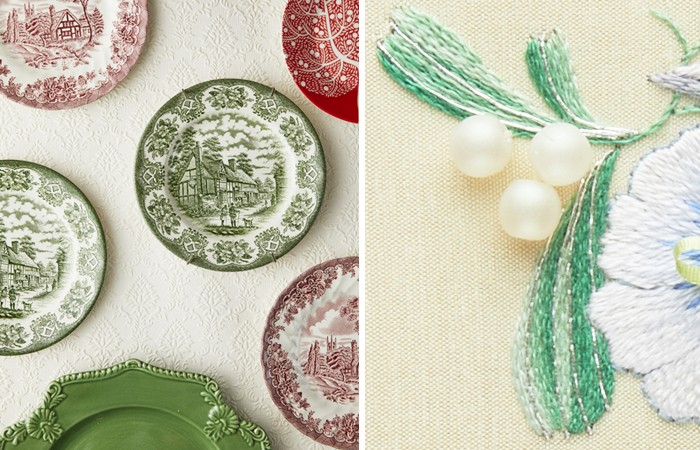 The Christmas Robin heralds the festive season in such glittering style, the fact that this delightful bird in real life is only seen in its British and European home, is transcended by its role in our global, modern day Christmas landscape. 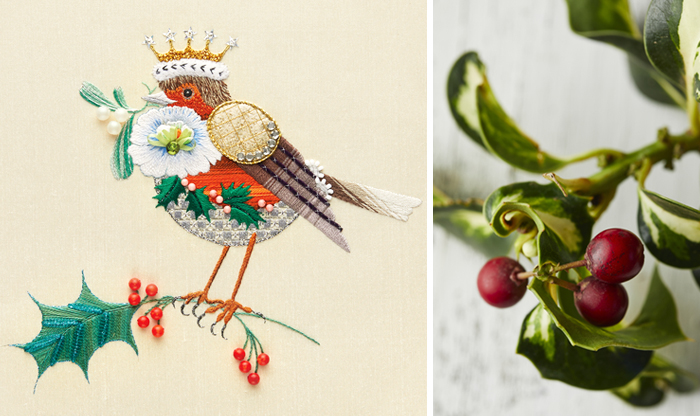 So much so that today, no matter where you live, you can invite the robin into your home to act as a reminder that Christmas will soon be here.

Make Your Own Christmas Robin 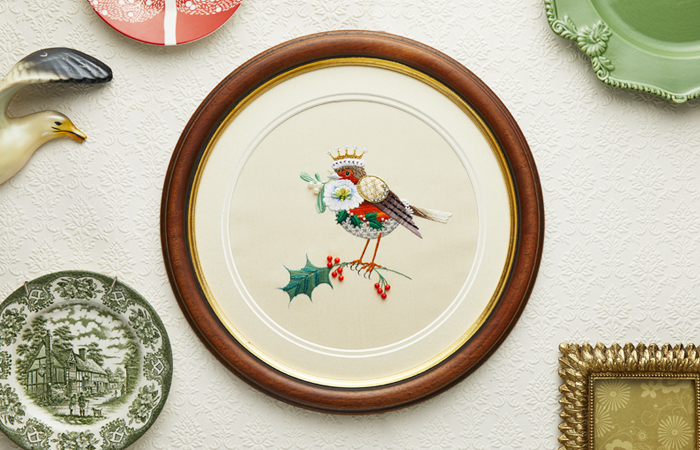 Christmas Robin by Nicola Jarvis is a royal robin resplendent in his sequin-studded Yuletide robes.